Actress Etinosa Reveals She Will Mess  Up A Quran In 2 Seconds If Given To Her.

Recall that days back, ActressEtinosa was involved in some internet trolling following the report of her saying that Proverbs 22vs6 is a scam as she smoked and used the Bible as an ashtray.

However following the recent actions of the actress, some fans also dared her to try the same act on a Quran, and on her IG story Etinosa was seen asking to be given the Islamic holy book, and she claimed to mess up within 2 seconds. 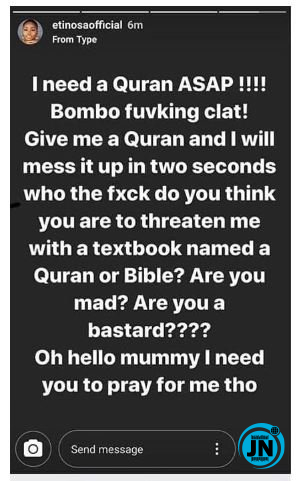 Etinosa in a new instagram post, wondered how one can effect change by living in denial. She also urged those she claimed are worse than her to retrace their step and stop hiding behind a religion which they know nothing about.

“How do you effect change when u are living in denial? You are worse than me. Be honest and slowly retrace your steps. stop hiding behind religion you know nothing about. I poured out my heart all through last night pondering on the words of this song and asking God DEEP questions.

Questions bring answers. Answers bring truth. The truth brings Freedom. I feel much better. @daddyfreeze I appreciate you but everybody should keep my name from their mouth. This race is Per Head. As for @tundeednut #EyanLegbegbe don’t worry yourself, I will call @oyemykke for you”