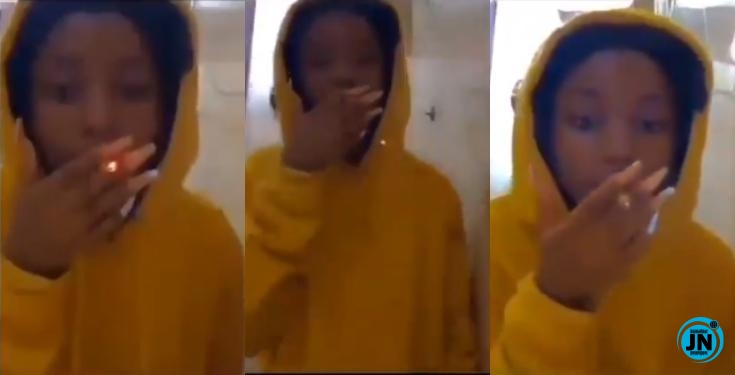 A video of a teenage Nigerian girl smoking weed, has sparked outrage on Twitter Naija.

The 15-year-old, shared a video of herself smoking weed inside the bathroom, and it has got Nigerians talking and giving their different opinions about it.

While some say it’s wrong on all levels, some argued that her parents are to be blamed.

Watch the video and see some reactions below…

A 15 year old girl smoking anything is wrong on all levels and there no english that can be used to make it look woke or right..

Will you approve of your 15 year old child or sibling smoking?

At 15, I never even knew what weed looked like. But she’s 15 and already puffing, na her parents I go blame sha.

On this she’s 15 topic, I’m seeing so many people saying “what’s bad about a 15yr doing weed?, most of y’all did worse things at the same age” jargons

Even if she’s 15 or 20…the truth is smoking is bad for the health,get that right.

Because she’s 15, she can’t smoke weed?So many bitches here started having sex before the age of 10.

I sha hope you people aren’t going too hard on her. She’s 15 and alot of people made mistakes at that age.

Let her go on nah

Excuse me please, how do you know that she is 15.do you know the girl in person or did she say her age in the video been posted