Popular music promoter based in America Ola Ibironke is popularly known as Dudu Heritage has finally addressed the rumors concerning his marriage to actress Bimbo Oshin.

Opening up on their marriage which is blessed with two adorable kids, Dudu Heritage in a chat with City People said:

There are so many rumors out there that made me develop a thick skin. So I keep them guessing all the time because the news still keeps circulating. The wedlock has produced two lovely children; a boy and a girl. So what else is there to say? For a man clocking 60 and still talking about a marriage that has happened 2004/2005?

That is why I said I always keep them guessing. That is how you know if you are still newsworthy. The only way you let the media run after you are when you answer every bit and pieces of the stories they write about you. We have been around for a very long time so stories don’t bother us again

. “But I can authoritatively tell you that Bimbo Oshin is at my house, any time, any day. Since she has been to my house she has never left. She is my wife. And to prove to you, maybe that would put the issue to rest, I will call her now for you to talk to her. (He called his wife, Bimbo Oshin, and put the phone on speaker).

“Hello, I am with City People, we are having a small chat and they said they heard that you have left your husband’s house’’, Dudu Heritage asked his wife.

Bimbo Oshin responded from the other end, “eh, won ma se mistake laye won o!” (It’s a pity, they have made the grievous mistake of their lives). But why are they always saying all that, because we do hear most of these things ourselves? “Anyways, I am in my husband’s house and I have never left.” (Laughs…) 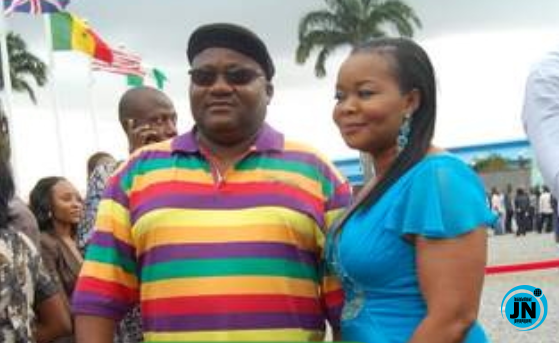