MI and A-Q address issues ranging from instagram live battles and giveaways to payments of tithes and the failure of the government, in the booth [The Live Report EP Review] | JustNaija 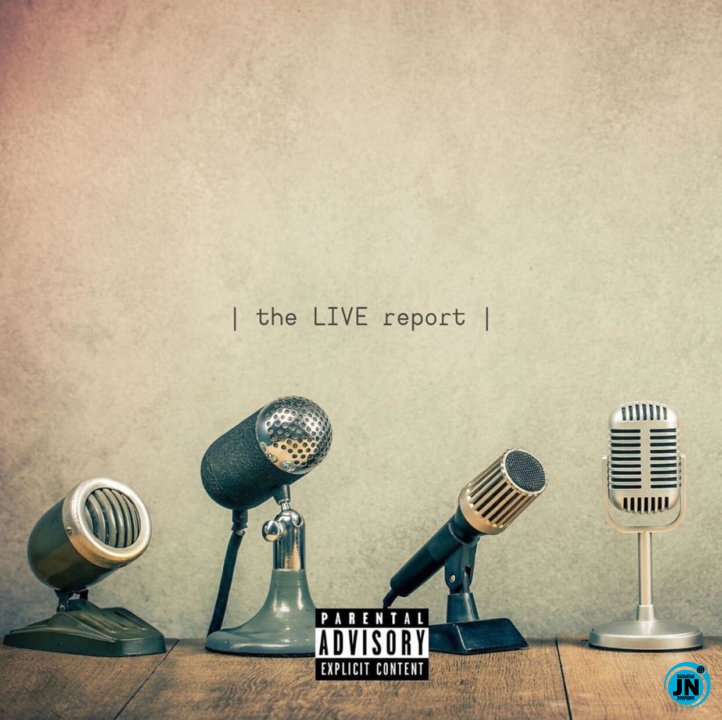 It all started from when a fan asked A-Q if he would ever record a project with MI Abaga accruing to the fact that they have had each other on their plethora projects and so they recorded The Live Report EP. A-Q recently released his God’s Engineering album and he promised fans that he was not going to put out any album after this but I guess this is an EP and not an album. MI by the way promised seven projects before he retires, I guess the number is down to six now. This is MI’s 10th project and A-Qs 10th also. These two rap heavyweights have both released albums this year and featured each other on them and this was one of the factors that led to the release of this album.

Motolani Alake of Pulse recently wrote an article talking about how rappers are commendably tying into the power of collaborations. In the article he talked about how he wants to see an ILLBliss and MI collaborative project, few days later MI releases an EP with A-Q to justify his statement about Nigerian rappers tying into the power of collaborations. Alake talked about how he talked to ILLBliss and how the rapper said he would like to see Nigerian rappers collaborate more on projects like the alte kids. This is exactly what we are seeing with the release of Live Report Ep and the year is just starting so we might see more of this as the year goes on, not to talk of the collaborative projects we have seen in the past between rappers such as Phyno and Olamide on 2 Kings and A-Q and Loose Kaynon on Crown. These rappers have done the most for the culture. It will be good to see more rappers on collaborative projects.

The 6 track EP is solely produced by their normal patner in hits Beats By Jayy. It houses Hip-Hop; Rap and Trap, R&B and Soul. It does not feature anybody. All the tracks on the EP contain deep messages.

Tone of the Conversation

The two rappers brag on most part of this song. They assume authoritative roles and dictate the Tone of the Conversation. The ‘conversation’ in this case is the influence of rappers towards the rap culture. They believe that in a roundtable they should dictate the tone of the conversation and they do so as they both brag about their achievements towards the culture. MI goes first with certain lines worthy of mention like “13 years of deck able verses, what more you asking”, “I earned my spot protecting you niggas am Amotekun, I’ve schooled at least 10 rappers in each of the 36 states”. A-Q comes in with tough lines like “said beef was all I brought to the table, why you reaching out now, same beef that put a stake on your table, you eat it like clowns”. He throws shots at the Instagram live battles that have been so popular since the lockdown, “Funny how these rappers wanna clash on IG live, problem is you don’t get money on IG live”. The authority they talk of on this track makes them most worthy to rhyme about the other topics on the album so this track easily paves the way for the other tracks on the EP.

This track talks about five topics; The brainwashing of Congregations by Pastors into believing in conspiracy theories, the creation of the Corona Virus pandemic by China and America to enable top Corporations stack billions as a result of the lockdown. It also ask’s questions like Can the vaccine for Corona Virus be part of the plan? Is it the electricity that we put the planet through? that caused the virus and Does it manifest signs of the end time as shown in the Holy Book?

The brainwashing of Congregations by Pastors into believing in conspiracy theories

MI takes shots at people that believe that the COVID-19 saga was caused by 5G “truthfully I wanna rhyme like Common Sense, I heard y’all talking bout 5G daymn y’all need Common Sense”, this is an interpolation from Jay Z’s line in Moment of Clarity, although he adds a little push to the pedals to drive home his point. He later forgives them when he blames the Pastors for this brainwashing, “I swear these niggas call a wall a fence and y’all are like o shit thank you God for your Prophets yes”. MI in doing this joins the host of others who have criticized Pastors for misleading the people. He blames the society for deciding to build more churches than schools.

AQ’s verse carries the meat on this topic. He talks about how the lockdown was orchestrated by China and America to gain from top Corporations in the sense that it was all orchestrated to enable them get more money during the lockdown and control individuals. He says the United States and China are behind it all because they are tech giants and they want to accumulate money from technology, “Its an American and Chinese tech war, they’ve been in bed for years and the apps is their sex toys”, “creators of the apps remain ahead of the crowd”.

Jesus Said Use Your Head

In Jesus Said Use Your Head, MI and A-Q come for Pastors but while A-Q throws shots at them, “I prolly know more than what’s in your Pastor’s head but you listen to this and tell me that it’s sacrilege, pay your tithes, pay your tithes but they never say it right, everything you pay them in tithes wouldn’t save your life”, MI talks to Jesus and tells him “I know you said touch not my anointed but I’m just so disappointed” then after a long talk, he takes the persona of the ‘Son of Man’(Jesus) once again like what he did on The Trinity off his Judah EP. As the ‘Son of Man’ now he advices the pastors, “the poor people you see begging their pain was meant to be smiles so one Sunday instead of offering to me offer to them”. He still continues as the ‘Son of Man’ and turns his attention from the Pastor to the people of the society, he then says “I am the Shepherd and you are my Sheep now listen this is deep, don’t let another Sheep convince you you are Sheep”. “Another Sheep” in this instance refers to the Pastors, he advises the people not to heed to the word of Pastors as opposed to his word this is because some Pastors out there are false prophets, they teach the wrong thing and mislead the people. On the other hand, some do not draw the Congregation closer to God, they draw the Congregation closer to themselves creating the belief that they are deities and one cannot do without them that is why some Pastors charge exorbitant rates for prayers and miracles. The thing many people do not understand is it is no longer a miracle if it happens every day. A-Q and MI tell the people this, bashing the Pastors and giving them advice at different parts of the song. Religion should be adhered to but at the same time people should be able to detect lies i.e. decipher extremist and fanatic views from the truth.

On Clap for Yourself MI and A-Q rap from different perspectives to justify the title of the song. The song is about those that live fakes lives on Instagram and lie about their wealth. MI takes the persona of a pretentious person, over exaggerating his wealth and boasting about what he doesn’t have while A-Q is direct with his jabs like he did on Jesus Said Use Your Head. This is the most lively song on the album as the message is not as strong as that carried across in the other songs. It is also carried with a lighter instrumental as opposed to the deep, sorrowful and dark ones on the other tracks of the body of work.

When I’m Gone is a deep song about life and death. Both rappers talk about the fakeness of life and how these things wash away when someone dies. They urge people to keep it real and not pretend because death can come anytime. They stress that people should be honest to each other and not make fake statements or give fake smiles. This message even stretches to after death, MI says that those that don’t like him should not be kind in their tweets and lie through their teeth after he dies as that does not help anybody since he is “lying six feet”.

This is a testament to the first song of the EP, Tone of the Conversation. Haven set the tone of the conversation which is obviously a high tone they exhaust their feelings casually with reckless abandon on the warm instrumental, I said warm because the instrumental is neither high nor low, hot nor cold. A-Q’s verse is very rich though but that cannot be said of MI’s verse in this particular song. He talks about instagram giveaways which have become very popular since the lockdown mostly as gifts for the numerous twerk videos on Instagram live organized by artists like Tory Lanez and rich yahoo boys, “Giveaways no! my family needs my income”. He believes that this instagram giveaways are unnecessary especially because most are centered around nefarious activities. He also talks about the statistics that the government releases every day about the number of people that have been infected with the Corona Virus and die as a result of it, he claims these numbers are false, “thousands are dying, the death rate is multiplying, the media data is lying, they hiding something inside them”. The Corona Virus conversation takes him by the hand to ‘Enterprises’ and reports her to him and he does not hesitate to give her lashes of the lyrical whip, “Enterprises devising ways to increase the prices, its money that matters to you, invisible to the crisis”.

This album deals with every topic it discusses in full detail with easy to understand lyrics and impeccable rap flow. Although topics were digressed from in certain tracks to rap about parallel or abstract things. It would have been worthy of a 10/10 if that singular short-coming didn’t rear its head but now it can comfortably put its figure 8 on a 10.