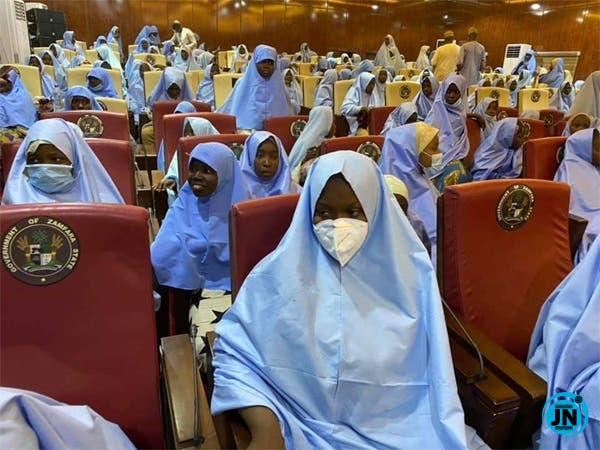 One of the victims of last Friday’s Zamfara Government Girls Secondary School, Jangebe, abduction, Hafsat Anka, said the captives threatened to kill, fry, and eat them if they misbehaved.

Hafsat, while narrating her ordeal to the News Agency of Nigeria (NAN) at the Government House, Gusau, shortly after regaining freedom, stated that they trekked over a long distance from the school, had a stopover for some hours before they reached their destination.

“There was no clean water or good food, and we felt we had already spent years even though it was our first day and the bandits kept firing into the air to scare us.

“They were very young boys with on one elder they called Kasalle or Yaya who gave them instructions, and he was the one that stopped them from touching any of us,” Hafsat stated.

According to her, the bandits wore military uniforms and claimed they defeated the security officials by invading the school and successfully whisking the girls away.

Hafsat, who said she was happy for being rescued, pointed out that she would continue her studies but as a day student.

NAN reports that the students were abducted last Friday around 2: 00 a.m. generating public outcry across the world, with many calling on the government and security agencies to ensure their safe return.

“Those who made it without social media are lucky” — Comedian, Taaooma slams Yomi Casual over comments
“Una no fit make me crase. E no go happen” — Singer 2Baba declares
“Marry! Marry!! see what it has caused” — Adekunle Gold reacts as his wife, Simi rocks his new shirt (photos)
“Nobody cheats more than a man that is not good in bed” — Blessing Okoro insists (Video)