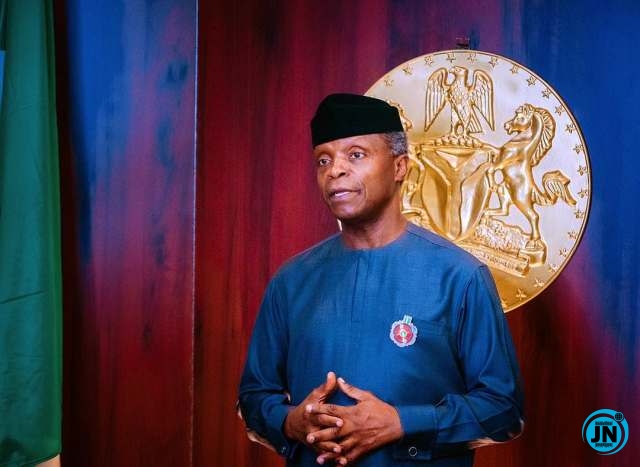 Vice President Yemi Osinbajo says the integration of artisanal and modular refinery operators into the mainstream oil and gas sector will boost local content in the industry.

Osinbajo’s spokesman, Laolu Akande, in a statement on Tuesday in Abuja, said the vice president spoke virtually at the National Summit on the Integration of Artisanal and Modular Refinery Operations in Nigeria.

The vice president said that such integration would advance the use of home-grown technology in the refining of petroleum products.

“We are confident that the integration of artisanal and modular refinery operations into the oil and gas sector will not only promote the inclusion of more local content in the industry; it will advance the use of home-grown technology in the refining of petroleum products.

“It will also curtail illegal oil activities in the Niger Delta regions.’’

Osinbajo, had in 2016, under President Muhammadu Buhari’s directive, embarked on a tour of oil-producing communities in the Niger Delta, in a bid to address lingering issues in the region.

This was preceded by the President’s meeting with Niger Delta leaders under the aegis of Pan-Niger Delta Forum, (PANDEF).

“One of the nagging issues we were confronted with during my tour was how to deal with the proliferation of artisanal refinery and its attendant negative environmental impact.

“Our solution was to promote the establishment of modular refineries; these artisanal refiners will be seen as investors and considered for strategic equity partnerships with technical and financial partners.

“This vision is hinged on the commitment of this present administration to develop the region and ensure that the people of the region benefit maximally from the wealth of their land.

“Indeed, the New Vision speaks to a progressive partnership between the federal government, state government, private sector, and the local communities.”

Osinbajo said that the transition from artisanal refineries to modular refineries had been delayed because of the operators’ expectation that the process would be fully underwritten by the government.

He said that the framework envisaged a private sector-led partnership with equity participation from the state government or its agencies, registered local cooperative societies, and the integration of regional refinery stakeholders, with the private investor having majority equity.

The vice president called on stakeholders at the summit to fashion a workable and viable blueprint that would guide and facilitate the integration of artisanal and modular refinery operators.

According to him, the gains of a seamless integration are enormous.

“We are confident that the integration of artisanal and modular refinery operations into the oil and gas sector will curtail illegal oil activities in the Niger Delta regions.

“It will also promote the availability of petroleum products, stabilize prices, eliminate shipping costs and provide employment opportunities for the youths in the region and Nigeria in general.

“We recognize that with enough artisanal and modular refineries in the country, we should be able to conserve foreign exchange now utilized for the importation of petroleum products and promote socio-economic development.

“The resultant proliferation of employment opportunities will also have the effect of curbing youth restiveness which is largely driven by a dearth of socioeconomic opportunity.

“With most of the youth engaged in productive endeavors, the region will be able to turn a new page in its history,” he said.

The summit was convened by the Senior Special Assistant to the President on Niger Delta Affairs, Sen. Ita Enang.

Dignitaries at the meeting included the Minister of State, Budget and National Planning, Prince Clem Agba, and representatives of the Minister or Niger Delta Affairs, Godswill Akpabio.

Also at the meeting were the Minister of Science and Technology, Ogbonnaya Onu, and Minister of State, Petroleum Resources, Chief Timipre Sylva.

Other participants were Hajia Zainab Ahmed, Minister of Finance, Budget and National Planning, and Minister of Environment, Dr. Mahmood Abubakar.

Why we have problems with public debt — ICSAN
“Only interested in money, every other thing is unnecessary noise” — Angel Smith reacts amid wardrobe malfunction
Alaafin Of Oyo Wants Me Dead — Young Queen Aanu cries out
EndSARS protesters sponsored by politicians — Tanko Yakassai