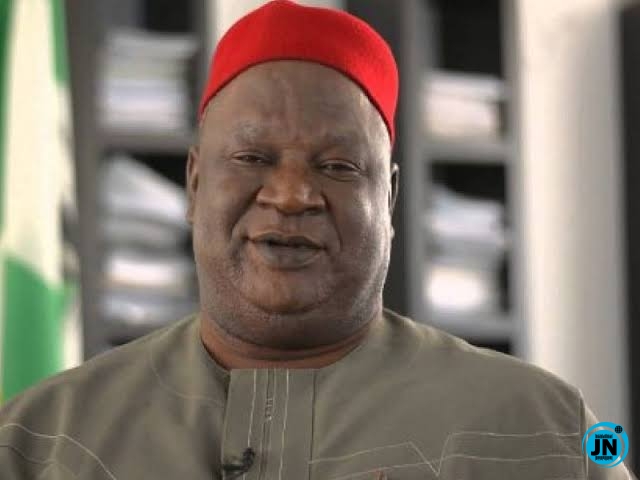 THE Acting Chairman of the All Progressives Congress, APC, Ebonyi State, Mr. Stanley Okoroemegha has described the letter written by the Senate President, Senator Anyim Pius Anyim as mere pettiness that is undeserving of an elder statesman of the State.

He said: “There is no reason for such outburst. It shows pettiness on his side. just a few weeks ago, I sent a Hilux van to him and he didn’t reject the offer. What kind of pettiness is this. I was the one that suggested at Exco that we should set a table at Udensi roundabout because of how beautiful the environment is. It was for the end of the year party.

“When the Hilux van was given to him he couldn’t afford N190,000 for a revolving light. This is just pettiness. This is not how a leader should end or retire. I will not join issues with him and am still finding it hard to believe whether he was in the right frame of mind while writing such a letter. This is pettiness.

“A few months ago, it was him and Arthur Eze. The land of Ebonyi has blessed him, so he learns to leave in peace. You could imagine that common community development leadership, he will bring his list that I should publish. The Governor said I should oblige it. I refused because it will cause a crisis. So, the Governor said I should handle it. What he was saying in his letter are all lies

“Am not going to join issues with him. Governor Umahi has told us to be careful because they are leaders. However, we cannot fold our arms and be watching them. it is no longer acceptable. How many of them have attracted things to Ebonyi. He cannot do it because he leaves a self-centered life. Ebonyi is wiser now.

“Why can’t he come out and contest for President? is he now not qualified? He wants us to be sending money to him. I advise him to reverse from his moves or else Ebonyians will react in a way they may not believe.”

‘E Don Start Oh’ - See How Nigerians Are Reacting To This Church Coronavirus Poster
#BBNAIJA2020: ‘Erica Might Be Acting With Kiddwaya’ – BBNaija Star, Leo Dasilva Claims
President Donald Trump Says Contracting Covid-19 Was A Blessing From God
Actor Adeniyi Johnson Hit Back At Fan Who Advised Him On His Acting Career