American boxing legend, Floyd Mayweather’s 19-year-old daughter could spend decades in prison after being charged with aggravated assault with a deadly weapon following an altercation with her boyfriend’s baby mama.

Iyanna “Yaya” Mayweather, 19, was arrested earlier this month after allegedly stabbing Lapattra Jacobs, who shares a child with her boyfriend, rapper NBA YoungBoy. 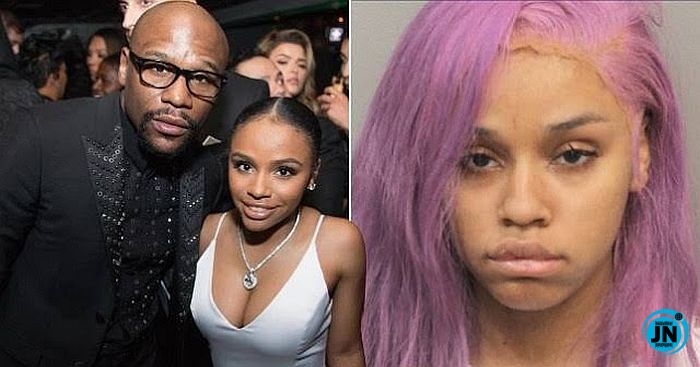 An altercation which reportedly occurred at the rapper’s Houston home on Saturday April 4, prompted a physical fight between the women. It was reported while arguing the two women made their way into the kitchen of Youngboy’s Houston home, where Mayweather picked up a knife and stabbed the Jacobs in the arms.

Iyanna Mayweather was arrested and booked into Harris County Jail after her alleged victim was rushed to a nearby hospital and underwent emergency surgery on her arms.

According to The Blast, Mayweather was charged with aggravated assault with a deadly weapon, a felony that can carry a heavy sentence. If convicted on the charge, Mayweather could be slapped with a $10,000 fine or receive up to 99 years in prison.

The Blast also added that it’s unlikely she will receive the maximum sentence, as she doesn’t appear to have a criminal history.

Mayweather is being represented by Kurt Schaffer, a famed attorney who has worked for celebrities like Slim Thug, Pimp C, and J Prince among others.

“Iyanna is doing fine; although she remains shaken by this unfortunate incident.”

Ugandan Artist Rain Curses On Nigerians After Omah Lay And Tems Arrest (Photo)
Oloture: Journalist Tobore Ovuorie Demands N225million from Mo Abudu
Pope Benedict says decision to resign entirely his own, has no regrets
#BBNAIJA5: Watch The Moment, Vee Wrestled With Ka3na To Sleep Beside Praise For The Night (VIDEO)

This one concern them.. lol