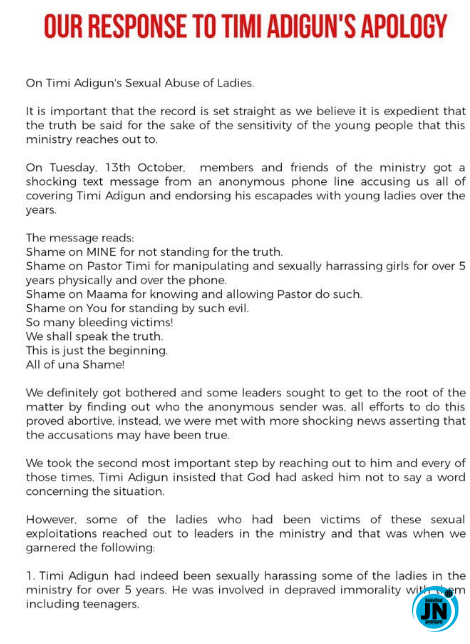 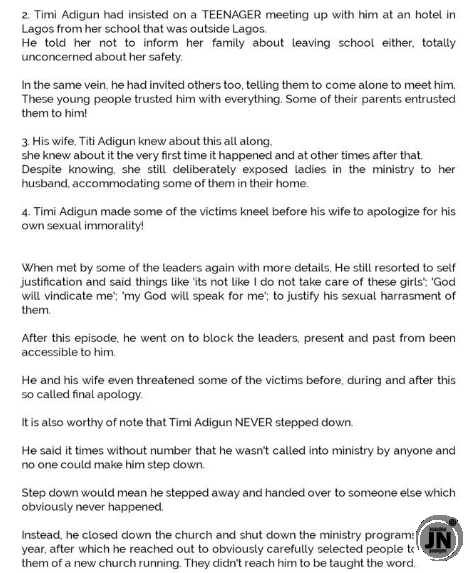 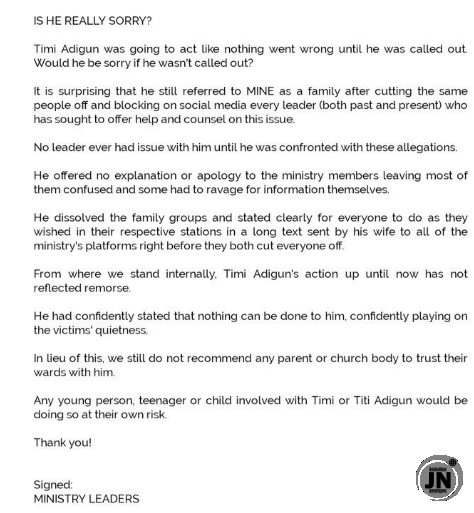 Coming after popular pastor, Timi Adigun apologized after he was disgraced for sexually abusing teenage girls in his church and teen ministry, past and present leaders of the ministry have released a statement saying they do not believe the pastor is sorry for allegedly sexually assaulting young female members because he and his wife have “threatened some of his victims after this so-called final apology”.

In a detailed statement, my Teenage Ministry narrated how they discovered the pastor had been allegedly sexually assaulting girls in his care.

They said they received a text message on Tuesday, October 13, accusing them of being silent while the pastor abuses girls. They decided to investigate and lots of other victims came out.

They said their investigations led them to discover that “Timi Adigun had indeed been sexually harassing some of the ladies in the ministry for over 5 years.”

They added that he was “involved in depraved morality with them, including teenagers.”

They also added that his wife, Titi Adigun, forced his victims to kneel down and apologize to him for “his own immoral acts”

He reportedly “insisted on a teenager meeting him at a hotel in Lagos from her school that is outside Lagos” and he, “told her not to inform her family”.

Though Timi Adigun said in his apology that his wife Titi Adigun was not aware of his escapades, my ministry says that is not true.

“His wife Titi Adigun knew about this all along,” the ministry wrote, adding, “She knew about it the very first time it happened and at other times after that.”

“Despite knowing, she still deliberately exposed ladies in the ministry to her husband, accommodating some of them in their home,” the statement adds.

The ministry further alleges that “Timi Adigun made some of the victims kneel before his wife to apologize for his own sexual  immorality.”

The ministry said that when church leaders presented the facts of their findings to Pastor Timi Adigun, “he resorted to self-justification, and said things like, ‘it’s not like I do not take care of these girls’, ‘God will vindicate me’, ‘ My God will speak for me’.”

The ministry said, “After this episode, he went on to block the leaders, present and past, from being accessible to him.”

They added that he didn’t offer members an apology, instead he “closed down the church and shut down the ministry programs” after which he reached out to “carefully selected people to inform them of a new church running”.

They also rubbished the pastor’s promise that he will step down.

“Timi Adigun NEVER STEPPED DOWN,” they wrote, adding, “He said it times without number that he wasn’t called into ministry by anyone and no one could make him step down.”

As for whether Timi Adigun is truly repentant, the ministry said his action up till now does not show remorse.

“Would he be sorry if he wasn’t called out?” they asked in the statement.

“From where we stand internally, Timi Adigun’s actions up till now has not reflected remorse.

“He had confidently stated that nothing can be done to him, confidently playing on the victims’ quietness.

“In lieu of this, we still do not recommend any parent or church body to trust their ward with him.

“Any young person, teenager, or child involved with Timi or Titi Adigun would be doing so at their own risk.”

The statement was signed by “Ministry Leaders ” and released online.

#BBNaija: "I Was Only Teaching Nengi How To Flirt" – Kiddwaya Replies Erica (VIDEO)
BBNaija: ‘What I Will Do When I See Tolanibaj After The Show’ – Vee Reveals
“Mama cut soap for us”- Reactions as singer, Omawumi shows off new looks in dazzling photos
”I’ve dumped a man because of how his ex looked” —Socialite Huddah Monroe