Popular Nigerian actress Funke Akindele-Bello ended up giving in to her fans and followers ' requests by posting a snapshot of her twin boys on Snapchat.

Remember the actress got a lot of backlashes after she shared a photo of herself and husband holding their twins hidden with their facial features.

Finally the actress unveiled the little boys in a shared post on her Snapchat page.

In the shot, JJC Skillz, her husband and father of the twins, was seen facing the camera with the two boys warmly cuddled into his hands. 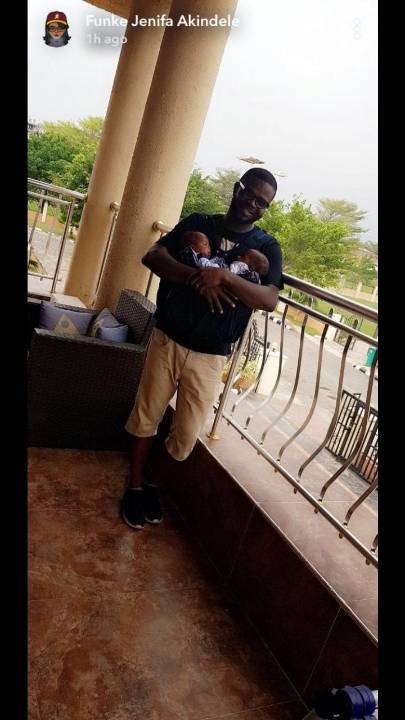 Akindele Olufunke Ayotunde is an actress and producer of Nigerian origin. From 1998 to 2002 Funke starred in the sitcom I Need to Know and in 2009 she won the Africa Movie Academy Award for Best Actress in a Leading Role.

Actor Yul Edochie Flaunts His Adorable Family As He Tags Them “The Yul Edochie Squad” (Photo)
‘My Son!’ - See This Adorable Video Of Wizkid And His Last Son Everyone Is Talking About
So Adorable! Davido Fiancée, Chioma Tattoos Their Son Name, ‘Ifeanyi’ On Her Body (Photo)
See Adorable Photos Of Actress Iyabo Ojo And Her Only Son