Fans Of Wizkid And Tiwa Savage Engage In Twitter War, See What Caused The Fight (Photos)
Posted by

Fans of Wizkid popular known as Wizkid FC and Tiwa Savage’s Savage Soldiers have clashed on popular social network, Twitter and their bants is getting the attention already. Recall, Wizkid and Tiwa Savage were known to be besties for years after series of videos and photos always captured them together.

They created musics together, performed together and partied together. However, since last year everything seemed to have switched up and the duo no longer give the public their usual stuffs.

They did not wish themselves when they celebrated their birthdays and this has made fans thought definitely something is wrong somewhere.

Well, this has made their fans become sworn enemies on Twitter.

Wizkid fans would always state that Wizkid gave Tiwa Savage attention and without him Tiwa would always not be talked about.

While, the Tiwa Savage fans would never entertain that but say their favourite gave Wizkid his first 1 million video views on Youtube.

It's still the same old story as they'll not give in for themselves.

“Tiwa Savage gave Wizkid his first 1m view in 24hrs.. When my Queen is lifting different Artist.. But FC don't know what Tiwa did to Wizkid.

They trash her because of Newcomer TEMs.. Because She is hot currently, still yet.. She drop verse on the song & show but it can't hit 1m.” Then some response from some Tiwa fans followed: Then a Wizkid fan replied: 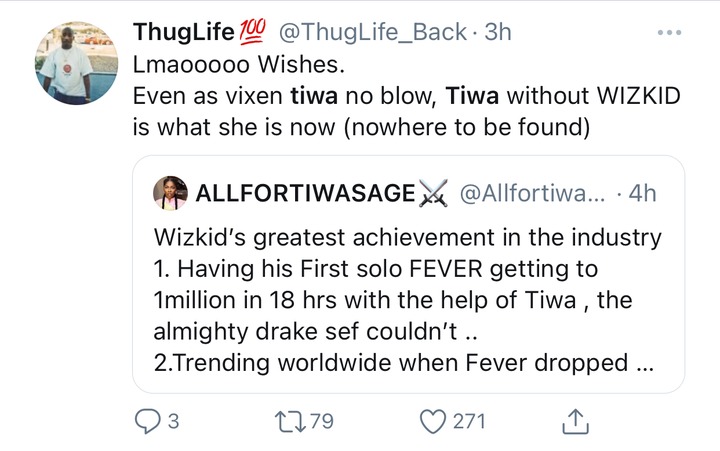 Then more reactions followed, see below: 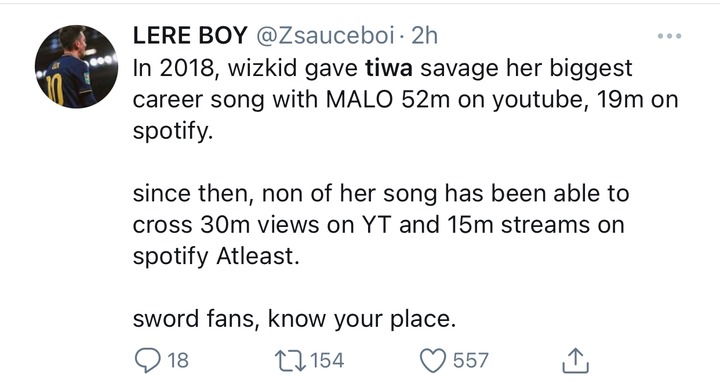 Video: See How Armed Robbers abadoned one of their colleague after hijacking a car on the road
#BBNaija: See How Viewers Voted For Their Favourite Housemates This Week, As Laycon Leads With Impressive Percentage
Why Davido’s Album Is One Of The Worst This Year & Why It Can’t Match Wizkid Or Burna Boy’s Albums (Opinion)
Burna Boy Speaks On His Motivation To Outdo Other African Artistes