Singer Eltee Skhillz appears to be breaking new barriers with his popular tune ODG, as it becomes the most Shazamed song in Nigeria and tops charts in 50 other nations. 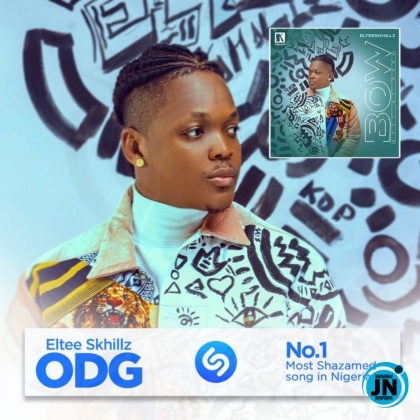 In January of 2022, the single was released as part of the six-track EP Body Of Work.

The song became viral thanks to several dancing videos, with one dance group in Uganda, "Ghetto Kids," receiving international exposure via TheShadeRoom, John Terry, and a slew of other foreign celebrities reposting it on their social media pages.

BBNaija: Vee Has Been Evicted From The Lockdown House
#BBNaija: "Big Brother Will Be Boring Without Me” – Erica
BBNaija Season 6: Male housemates snub Angel, Peace, and other of their female counterparts
“I may not have a man, but I’m a great mother” – Cuppy boasts