BREAKING: Ekiti State Government Orders full and total shut down and 12-hour dusk to dawn curfew in the State | JustNaija 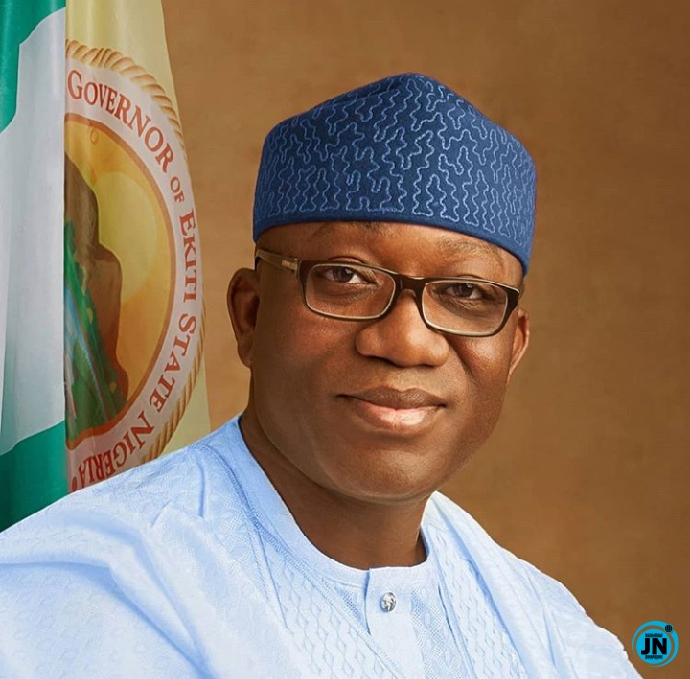 The curfew will restrict any form of movement and good for an initial period of 14 days.

Governor of Ekiti State, Dr. Kayode Fayemi made this known through a press briefing held on Sunday morning which was also published on his official Facebook account.

“I hereby, in pursuant to Section 8 of the Quarantine Act, Laws of the Federation of Nigeria 2004 and the Constitution of the Federal Republic of Nigeria 1999 (as amended) impose a curfew of movement in Ekiti State.

Enforcing the curfew
Every person is to remain confined to his current location as movement between local government areas, towns, villages, and communities have been prohibited.

The governor also stated that all land borders have been closed and travelers are expected to remain in their current locations for the duration. Only vehicles bringing in fuel, foods, drugs and other essentials will be allowed into the state.

All means of public transportation including bus services, taxi services, motorbikes (Okada) and tricycle services (Keke), are covered by this ban as well, with the exception of those rendering essential services, and these exceptions are expected to maintain the highest level of hygiene and keep to social distancing.

Only essential service providers are exempted, and they would be expected to move about with an identity card issued by their institutions. Listing out the of food and beverages, pharmaceuticals, medicine, paper and plastic packages, first responders, banks and financial institutions, and security agencies

All other businesses and entities are expected to be shut down.

By this directive, all forms of religious, social or political gatherings have also been banned, as churches, mosques, night clubs, and bars are expected to be locked down for the period. Where any gathering is to be held out of necessity, attendance will be restricted to 20 persons.

Dr. Kayode Fayemi added that defaulters would be sanctioned with heavy fines or 6 months imprisonment.

“Any person who contravenes these regulations shall be guilty of an offense and, on conviction, liable to a fine or to imprisonment for a period not exceeding six months or to both such fine and imprisonment” the governor stated.

Governor Fayemi stated that it would be a great discomfort but urged the residents of the state to adhere to it in order to stay healthy and alive.

To make the period easier for citizens, the government introduced certain palliatives including an advance payment of March 2020 salaries to civil servants, and reactivation of the Ekiti State Food Bank to provide food items to the poor and vulnerable families in Ekiti state.

“The State Government will consider providing a stipend to our self-employed citizens whose daily income will be interrupted at this time as subsidy for their loss of income. I have directed the Commissioners of Finance and Budget to advise on the amount the State can afford in view of our dire financial constraints.

“This was despite the fact that the FAAC disbursement for March was significantly lower than our salaries and many other states have found it difficult to pay March salaries. We are however hopeful that subsequent months will not fail, though the implications of the global economy are not very encouraging as IMF formally announced that the world is now in recession due to the coronavirus pandemic” he said.

Fayemi encouraged the people not to panic or spread rumors but to adhere to the directives laid down so that the pandemic could come to an end very soon.