Comedian Josh2funny ties the knot with longtime lover
Posted by

Nigerian comedian popularly known as Josh2funny has tied the knot with his longtime girlfriend a year after she accepted his open proposal to her.

The comedian via his social media handle excitedly shared the photo of his wedding ceremony which was held privately at the Ministry of Interior, Federal marriage Registry Ikoyi yesterday the 17th of December 2020.

The event even though lowkey was graced by family and friends of the couples.

See photos have captured by Kemi Fiani News below;

A year ago, Kemi Filani recalls that the comedian gushed about his engagement to his heartthrob, and he decided to flaunt her on Instagram, also announcing that he is off the market.

“Thanks for accepting me… Them Don collect me oooooo” 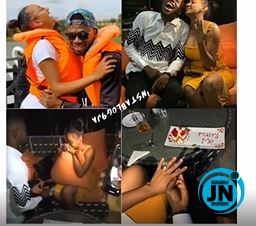 A date for a wedding has not been announced yet but be rest assured that we will keep you updated on their relationship.

See a video of the moment he proposed below:-

Comedian Josh2funny is popular for his funny skits with his friend and colleague Bellokreb who acts as mama Pamera in their videos.

Josh2funny who’s breakthrough skit ”don’t leave me” electrified social media and gone viral around the world, revealed that comedy is his life in an exclusive interview.

The young comedian is also known as Alfred, has a huge following of 1.5 million Instagram followers and undoubtedly one of the flourishing generations of comedians in Africa’s most populous country that have gained widespread popularity, largely through skits posted online.

Josh2funny came to limelight on 24 March, when he posted a skit on Instagram from his home in Lagos. Egged on by his “hypeman” Bello Khabir, he played around with the word “leaf”.

Nina’s husband, Tony has shown he’s pleased with his wife’s newly enhanced butt
“My sister once arranged with her boyfriend to confirm my virginity” – Nkechi Blessing narrates
#BBNaija: Biggie assigns Maria with task of picking ‘bottom 6 housemates’ for possible eviction (Video)
Lady breaks up with man over refusal to do ‘yahoo yahoo’