Beautiful on-screen characters, Bimbo Afolayan and Regina Chukwu who once had a fruitful and enviable relationship, are reportedly sworn enemies to now! 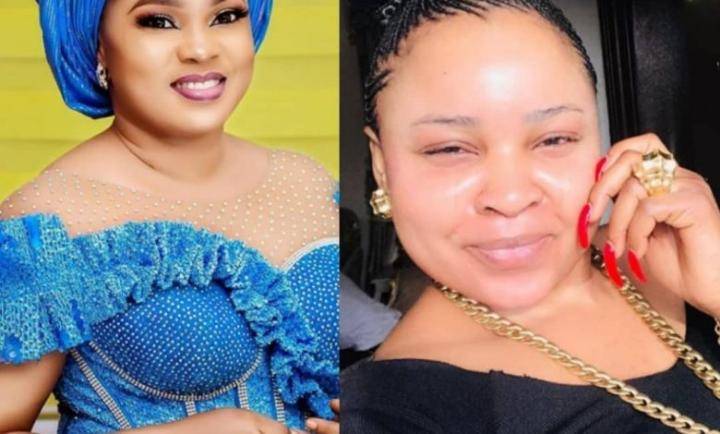 The Nollywood actors, both of whom in their chosen profession carved a niche for themselves, became the envy of all when Regina Chukwu started glowing — her skin blossomed and many of her fans and followers on Instagram asked what she was applying to her skin.

With all sincerity of heart, she began to tell everybody who cared to listen that it was the core of Bimbo Afolayan's range of cosmetic products.

That was a plus for these products and for those body products Bimbo (nee Ogunowo) became a go-to. The business boomed, and millions were raked at the bank by Bimbo Afolayan, who was still single then (2017).

Getting Regina Chukwu as a mentor has been all she wanted to even crack. In reality, Bimbo took Instagram to narrate how she started her business and how it didn't succeed. The actress, who later married film director Okiki Afolayan, admitted she did not get the patronage to boost their sales.

She was speaking to Regina Chukwu, a widow and mother of two children, according to her, and help came up. Regina, then deeply interested in the making of films, was willing to help a vulnerable colleague.

Bimbo admitted that Regina had started to help her market the items, and that this attracted buyers because Regina was really sparkling.

For a while this persisted and Bimbo kept smiling at the bank.

Immediately in the' commercial' posts there was a lull. Regina, who was also a friend of Adediwura Adeseigha and Liz Dasilva, ignored all the updates of Bimbo, declined to press the Like button (which she did with pleasure) and there was no longer any mention of the products she used on her face.

Then it was the birthday of her (Regina) and Bimbo sent a shout-out for the party. Of course, it was ignored and the wife of Okiki, who had begun to make noise about her then fiancé and their upcoming wedding, posted a tweet, asking the children of Regina to help wish their mum a happy birthday.

Though after a while the' birthday shout-out' episode seemed to be fixed, the last straw that broke the camel's back to the beloved relationship was when Regina made her skin care products debut!

Regina began a vigorous campaign of her products without any explanation of what happened between her and Bimbo and started using all the tactics that Bimbo used in selling her goods — giveaways, putting up selfies, writing short stories about her products, and distributing the money to followers.

It marked the start of an interminable war between the two friends— they stopped talking to each other.

According to sources, it was Regina Chukwu's good friend Okiki Afolayan, who was (and is still) loved by many in the industry.

Currently in one of the videos shared by Bimbo on Tuesday where she cursed some trolls for insulting her for crying out that her mother had been attacked by a landlord in Lagos, the fair-complexed actress accused some of her colleagues of being part of the social media attack because they are envious of her and her mother.

We pray for the retrieval of that friendship.