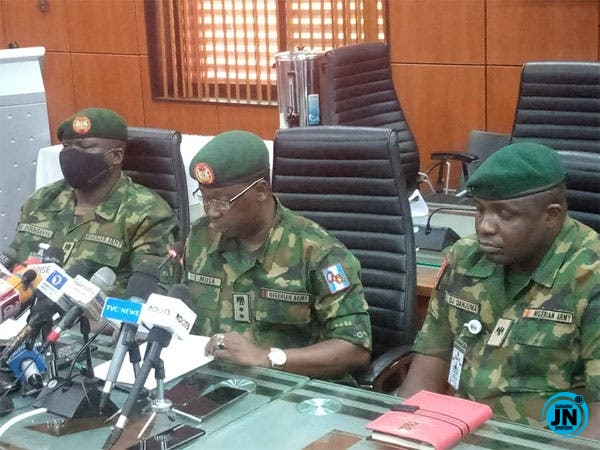 By Kingsley Omonobi – Abuja. Says Army was privy to Grand Design by Sponsors of the protests to drag it into crisis – Buratai.…Says detractors and international Collaborators mischievously and deliberately misrepresented troops' efforts to ensure compliance with a curfew imposed by legitimate civil authorities...Order’s PSOs, GOC, Field Commanders to respond quickly and decisively, to any act of arson, or attempt to kill or main any military or security personnel and law-abiding citizens.…Alerts of unscrupulous elements plots to acquire arms and ammunition at all cost from security personnel as 10 AK 47 rifles have been lost to the miscreants in last 2 weeks.…Reiterated that there is no choice between a democratically United, Nigeria and a nation disunited in a state of anarchy and retrogression.

The Chief of Army Staff, Lt. General Tukur Yusuf Buratai has read the riot act to General Officers Commanding, Principal Staff Officers, and Field Commanders of the Nigerian Army to bring to an end immediately, the arson, killings, and looting going on across the country as a result of miscreants and unscrupulous elements hijacking the EndSARS Protests.

Addressing the army hierarchy which he summoned to Abuja on Monday, General Buratai gave an Express order to GOCs and Field Commanders to act quickly and decisively with any act of arson, or attempt to kill or main any military or security personnel and law-abiding citizens by unscrupulous elements.

While noting that the Nigerian Army was privy to the grand design by sponsors of the protests to drag it into crisis and discredit it, he said the detractors and international Collaborators mischievously and deliberately misrepresented troops' efforts to ensure compliance with a curfew imposed by legitimate civil authorities.

” At the meeting, the COAS Lt Gen TY Buratai made it unambiguously clear to the PS0’s, GOCs, and Field Commamlers that there will be no room for disloyalty amongst all officers and soldiers of the Nigerian Army (NA).

“He directed that they (PSOs, GOCs, and Field Commanders) must reiterate to all their sulmrtlinatcs that the NA is determined to ensure democratic stability in Nigeria as the only panacea for development and progress.

“General Buratai also said “The best system of governance is democracy and we must all ensure that Nigeria’s democracy remains stable and steady. We will not allow any force, elements, or destabilizing agents in or outside our country to set our beloved country on fire.

“We remain resolute in doing everything possible to ensure that subversive elements, detractors, and other enemies of this great nation do not achieve their aims and objectives of destabilization”.

“General Buratai drew the attention of all the participants at the meeting that “The events of the past few days in our dear nation have shown the determination of some unscrupulous individuals and groups to destabilize Nigeria by all means.

“These individuals, groups and other undesirable elements have hijacked the peaceful #BNDSARS protest marches resulting in widespread violence, acts of wanton destruction and looting of public and private properties in many parts of the country. These acts led to the imposition of curfew in several states of the federation”.

“He also said that right from the onset of ENDSARS protest, the NA has been aware of the grand design by the sponsors of the protests to draw it into the crisis. The plan was to embark on massive propaganda to discredit the military and the government so as to set the people against the NA once it is called out to aid the civil authorities.

“The NA being aware of the devilish plan was careful not to be dragged in and issued the initial warning through a press release on 14 October 2020 of our resolve to secure and safeguard a United Nigeria. Now the detractors alongside their local and international collaborators have mischievously and deliberately misrepresented troops’ efforts to ensure compliance with the curfew imposed by legitimate civil authorities in Lagos and other states.

“These agitators are falsely accusing the NA of being responsible for the activities of the miscreants despite glaring evidence to the contrary. They have continually threatened to report the NA to the International Criminal Court (ICC) and also threatened various forms of sanctions against personnel and their families.

“Thankfully, however, a large percentage of Nigerians and the international community have started seeing through the smokescreen of falsehood and deliberate misrepresentation of facts being orchestrated by enemies of Nigeria and have retracted their earlier false publications.

The COAS further said –“Despite all these, the NA has continued to exercise restraint applied all the Principles of Internal Security Operations and fully abided by the internationally recognized rules of Engagement as contained in our published Standard Operating Procedures for Internal Security Operations which are derived from the International Human Rights Laws and are in accordance with the international principles guiding the use of force”.

“He used the opportunity to re-emphasize that none of the P803, GOCs, Field Commanders and other officers and soldiers of the NA should be afraid of the ICC for carrying out their legitimate duties as stated in the 1999 Constitution of the Federal Republic of Nigeria (as amended) and other extant laws, rules and regulations of Nigeria. He further averred that –“They have every right

“Under the Constitution to carry out assigned and legitimate roles of maintaining law and order in aid of civil authorities and other security agencies. He reiterated that anyone who doubts their commitment to their constitutional responsibilities must be made to know that they remain committed, loyal, and unwavering in ensuring the unity, stability, and security of our dear country Nigeria. H

He charged them to show the detractors and other elements of destabilization that they are neither part of them nor in any way supportive of their activities at all times. He directed that any act of arson or attempt to kill or maim any military or security personnel and other law-abiding civilians must be responded to quickly and decisively.

“According to him –“In dealing with any security threat, they must fully cooperate with personnel of the Nigerian Police Force and other security agencies and must ensure that everyone is in full compliance with imposed curfews and any other extant security instructions in force”.

“General Buratai also alerted the PSOs, GOCs and Field Commanders that –“The recent activities by unscrupulous elements have shown their desire to acquire arms and ammunition at all costs from security personnel. No less than 10 AK-47 rifles have been lost to these miscreants in the past 2 weeks across the country with attendant loss of lives of personnel.

” He charged Commanders to nip in the bud this emerging trend at all cost, and directed them to warn their troops on internal security or on guard duties outside the barracks to be at maximum alert at all times and to also deal decisively with any attack on their duty locations”. General Buratai concluded that “There is no choice between a democratically united, strong and prosperous Nigeria and a nation disunited in a state of anarchy and retrogression. We must all strive for a united, strong, stable, and progressive Nigeria”.

“At the end of the meeting, the P805, GOCs and Field Commanders resolved to a. Remain Loyal to the Federal Government of Nigeria under President Muhammadu Buhari. B. Ensure the unity and indivisibility of our country. c. Assist the Federal Government to bring an end to insecurity across the country and to Prevent miscreants and criminals from hijacking the ENDSARS protest nationwide. (1. Remain focus and not to be deterred by any local or international threats.

“All Commanders have been directed to intensify joint training with the Nigerian Police and other Sister Security Agencies to enhance interagency collaboration and cooperation.

Be at alert, deal decisively with any attack in your duty locations – Buratai charges Soldiers

So good for you general