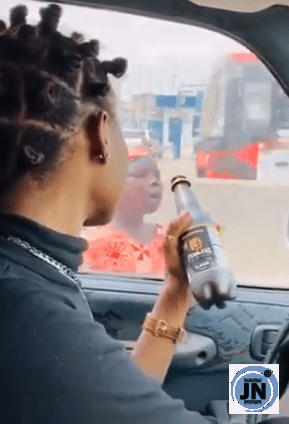 A Twitter influencer, Motara, has sparked outrage after she was filmed enticing a poor child beggar with a bottle of drink only to leave her hanging.

In the video, Motara is seen driving in traffic when a child beggar walks up to her window to beg.

Motara motions with her bottle of drink, asking if the child wants to drink and she nods. With the window still up, Motara places the mouth of the bottle near the girl’s mouth.

As the cars start moving, the girl runs after Motara’s car, hoping for the drink, but she continues to use the drink to raise her hopes without actually giving the child the drink.

She ends up laughing at the child before gulping down the drink and driving off.

Motara shared the video on her WhatsApp status then took it down, but it had already been captured by others and it went viral.

She posted her story on here about how her mother is still in the hawking business and lowkey, I felt for her but what is this bullshit? pic.twitter.com/F7o3KiDSeM

AKA Mocks Nigerians 'We Hosted The World Cup, You Hosted Cardi B'
Davido Mocks Peruzzi Saying He Can't Even Imagine Seeing Him A Surgery Room With Scissors
Twitter influencer Motara mocks child beggar with a bottle of drink
‘Go and Marry’ – Troll mocks actress, Dayo Amusa for not having a husband