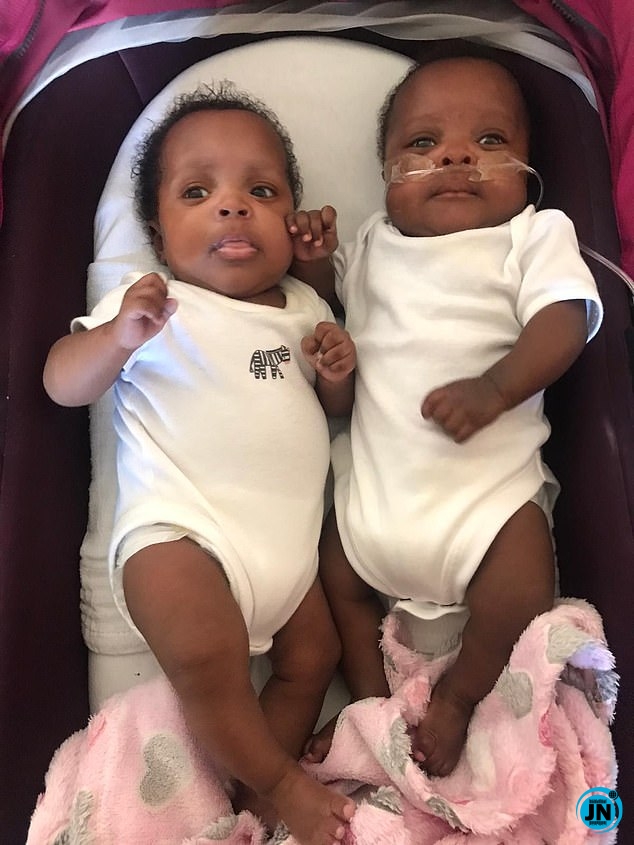 A Nigerian woman, Perpetual Uke based in the United Kingdom has given birth to a set of twins while in coronavirus coma.

According to Dailymail, the NHS consultant whose premature twins were delivered by caesarean has now safely returned home.

Perpetual Uke gave birth while on a ventilator in an induced coma and did not see her newborn babies until she came round sixteen days later.

The twins, Palmer, a girl and Pascal, a boy, stayed in a Birmingham hospital where they ‘fought aggressively for their lives’ before being discharged more than 100 days later.

After calling NHS 111 she began a period of self-isolation but, over the coming days, she felt progressively more unwell.

She was admitted to a respiratory ward via the Emergency Department at the Queen Elizabeth Hospital Birmingham but due to a deterioration in her condition, she was quickly transferred to the Critical Care Unit.

The High-Risk Maternity Outreach team from the Women’s Hospital conducted daily reviews and scans of her babies during this time when the seriousness of Perpetual’s condition meant she was placed into an induced coma and her breathing was taken over by a ventilator, as she fought the infection.

It was then decided that it would be safer for Perpetual and her twins for them to be delivered via caesarean section. The team helped bring them into the world on April 10 at 26 weeks.

Sochika Palmer weighed just 770 grams while her brother, Osinachi Pascal, weighed 850 grams.Immediately after they were born, they were admitted to the specialist Neonatal Intensive Care Unit.

Perpetual continued to receive care within the Critical Care Unit for another 16 days, during which time her husband Matthew spent time with his new twins and the couple’s other children, Nnamdi Ronald and Chisimdi Claire.

On April 26 the news the family had been praying for happened. Perpetual woke up; before being told her twins had been delivered and were doing well in our NICU.

"When I woke up, I had significant confusion as I could not see my pregnancy.

It was really difficult at first as during my sedation I had some really terrifying vivid dreams.

Initially, I believed I had lost my twins, husband and other children". 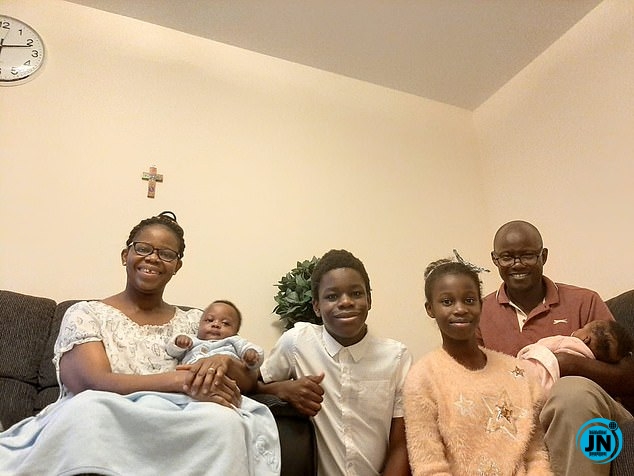 ‘The first time I met the twins was very emotional. I was happy that we were all alive, but obviously concerned about their severe prematurity which has its own risks. ‘I had never wanted them to go through this difficult path at the start of their lives. They couldn’t see their mum for two weeks, which obviously made me very sad but, importantly, things had progressed well.’

Both mum and babies continued to do well and, more than a month after first being admitted to hospital, Perpetual was able to return to the family home in Harborne when she was able to see her other children for the first time since beginning to feel unwell. The twins, Palmer and Pascal, continued to be cared for round the clock in the NICU, making progress each day before they were well enough to join their family.

116 days into their lives they were discharged – the family clapped out of the doors by an emotional team. Perpetual added: ‘From birth, Palmer and Pascal were managed professionally, with excellent care. They fought aggressively for their lives and I was very emotional the day their 100 days in NICU was celebrated.’I remain ever grateful to God almighty for using the amazing NICU team in restoring their lives.’

Yvonne Heward, Head of Neonatal Nursing at Birmingham Women’s and Children’s, said: ‘It was a very emotional time when Perpetual was treated in intensive care.

‘Their journey has been miraculous and the day of their discharge home under the care of our Neonatal Community Outreach Team (NCOT) was very emotional indeed. It was such a pleasure for us to care for this wonderful family and we have the upmost admiration for them.’

Dr Anjali Crawshaw, Consultant Respiratory Physician at UHB, said: ‘COVID-19 is a terrifying experience for anybody who develops serious disease, and this fear understandably becomes heightened when you are pregnant, but thanks to the expert care she received from our clinical teams in the critical care unit and on wards 516 and 517, and the superb care she received from the Women’s Hospital team, we now have two healthy babies at home with their mum who is on her way to recovery.’