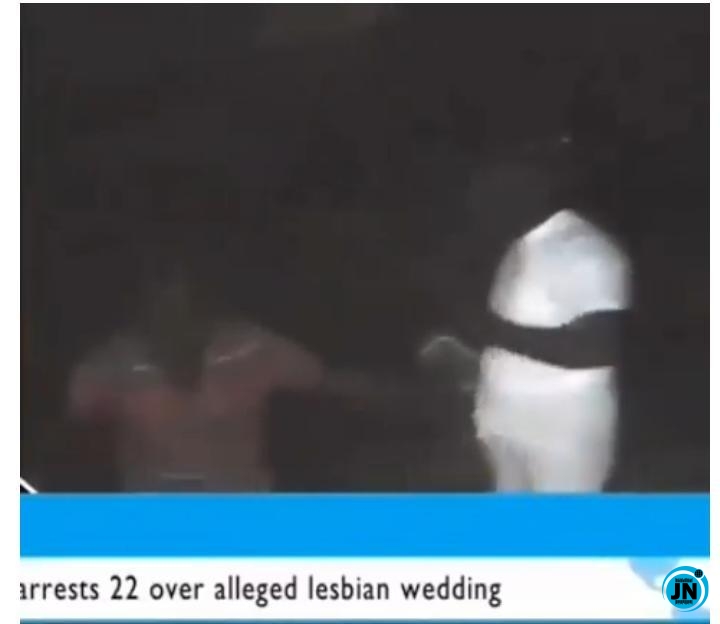 A video that captures the moment police officers disrupted a wedding to catch lesbians who were about to get married has gone viral.

The viral video obtained by Ghanaweb shows police officers shouting and pushing the attendees while making arrests in Ghana.

Afterward, the Police had no option than to grant bail and release the women arrested as there were no available female cells at the time of the arrest in the local police station. 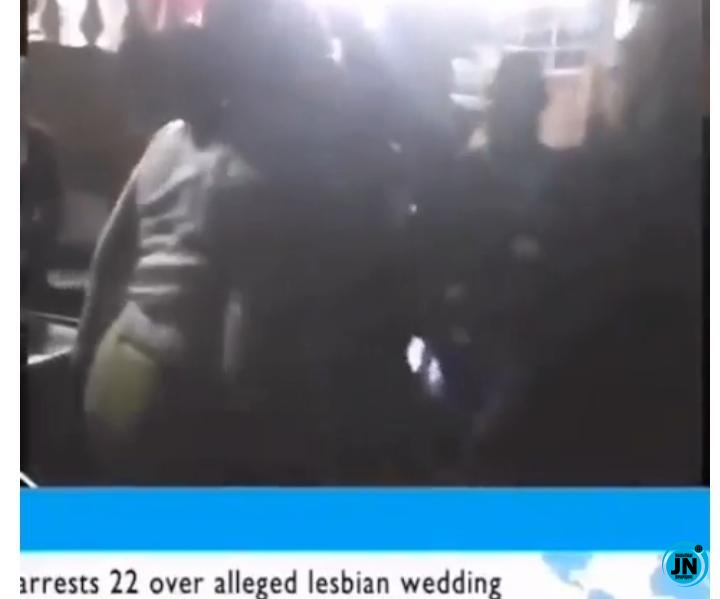 She spoke to Ghanaweb about the incident as she said the organizers tried to portray the event as a birthday party, but the decorations sold out the real purpose. As the decorations that were in place weren’t that of a birthday ceremony as it was made to believe.

The event however occurred in Kwahu- Obomen in the Eastern region of the country.

Pokua further revealed that the unnamed venue was well decorated for the wedding, with a cake ready to be cut by the newly wedded couple who are both women.

The wedding ceremony itself took place in a separate room with close confidants.

“I had information that some people suspected to be gays and lesbians were having a party and named the party ‘birthday party and they had planned to have a marriage ceremony, meaning two ladies were going to get married.

“During the event, I heard the emcee saying ‘today, we have a vow to make, we’re here purposely for something whether police come or not, we go do our thing.

“When they came out, I saw a woman with what looked like a lace made into a wedding gown with a veil, bridal fan, and bridal purse, the one acting like a man was also costumed in a Nigerian outfit,” Pokua recalled, adding the two women “came out of the room as a couple.”

The alleged lesbians were arrested for not only partaking in activity contrary to the Ghanaian constitution but also violating the Covid-19 protocol.

It was also gathered that the Landlord of the undisclosed building could face charges. It is reported that the building is also used for illegal activities such as prostitution.

The landlord had therefore being summoned to appear before Kwaha-Obomeng Chief Nana Effah Opinamen II and other elders to explain the reason behind renting his building for such illegal practice.

Starboy No Dey Endorse No Pastor Or Church O! - Wizkid
‘Buhari Is Not Our Problem’ - President Buhari Daughter, Zahra Speaks Out, Nigerians Blast Her
Ini Edo cries out bitterly, reveals why she has been depressed
Steve Thompson confirms reports that he has ended relationship with wife, barely 5 months after marriage