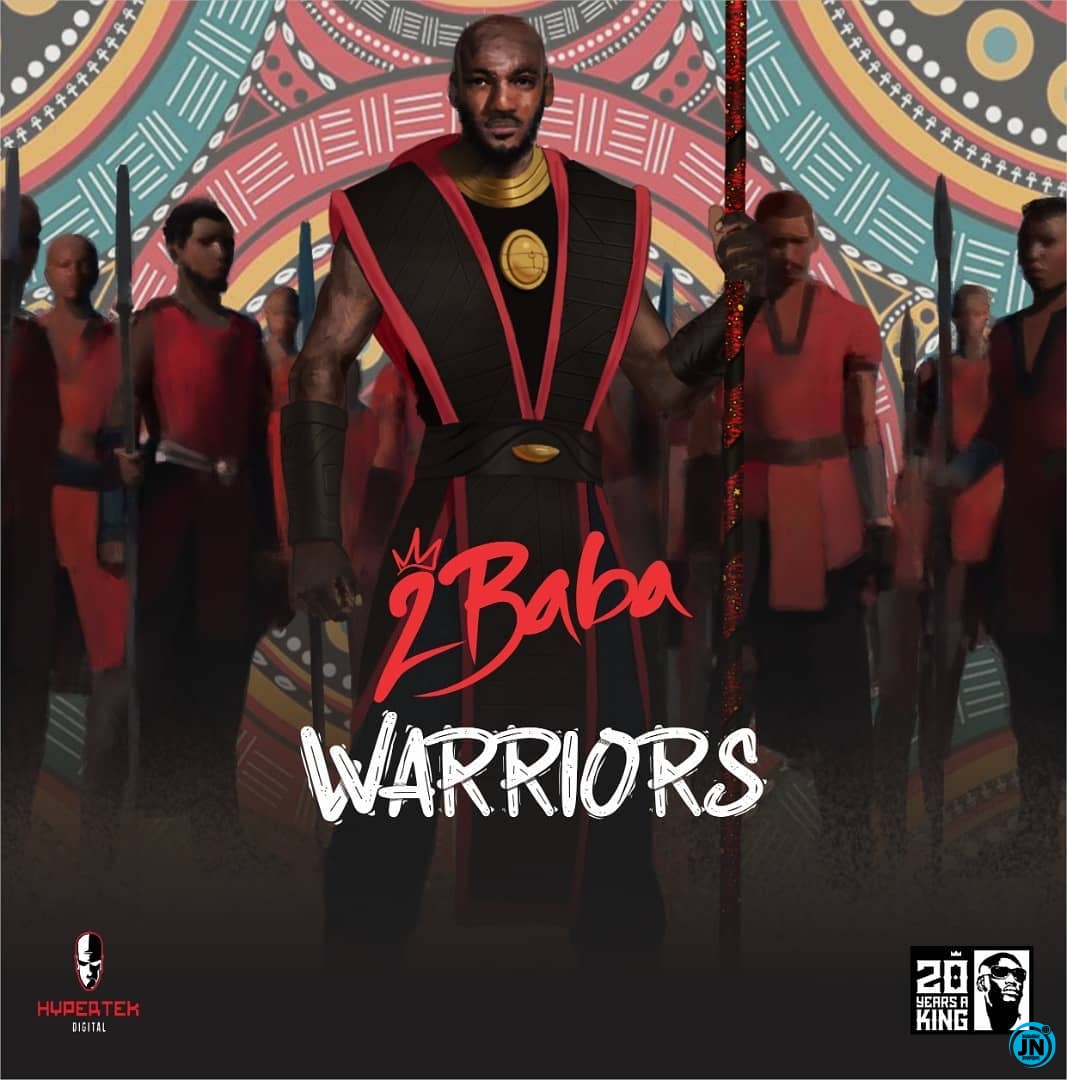 On Friday 28 February the legendary icon 2Baba released his ninth studio album titled Warriors. The 13-track album boasts of key features such as Burna Boy, Wizkid, Tiwa Savage, Olamide and Peruzzi Vibes. This album comes six years after his last album The Ascension which was released in 2014. The album contains previously released singles like Amaka, Oyi and Important. Production credits go to Bolaji Beatz, Speroach, Jay Sleek, Spellz and Black Jerzee. The body of work is made up of Afrobeats, Afro-pop, Reggae and R&B. The album shows 2Baba’s ability to adjust to industry trends as he has a different vibe from his previously released albums. This might just be why the album took this long to surface

The first track off the album Warriors which bears the same name as the title of the album carries the bulk of the message of the album. 2Baba sings about hustling and being a survivor, “we be bloody survivors”. He does this with commanding and easy vocals accompanied with the reggae instrumental produced by Bolaji Beatz. The legend addresses people that don’t want to see him make it, “They wanna see me fail so I guess I will fail them”

On the second track off the album We Must Groove of which he recently released a visual for, he seeks the assistance of self-acclaimed African Giant, Odogwu and Don Gorgon, Burna Boy. In this track he talks about the fact that life has its problems but “as long as your brain still dey function” there has to be rest after work. Burna Boy takes the second verse with his husky voice and his patoi for which he is well known for, then switching from patoi to pidgin whilst maintaining the message of the song and bragging a bit on lines such as “no dey confuse you


can’t walk in my shoes”. It is not an understatement to say it is already in the run for Best Collaboration of the year.

On the third track Important which is personally my best joint off the album, 2Baba shows his versatility in sparkling glee. In the beginning of the track he goes traditional chanting his mother tongue at the top of his voice “Nka hale leche Kelewo keledrop Ika tunabah Nege meje kenemo” then he decides to show us that he can go head to head with the great rappers like Modenine and MI, rapping a few lines with reckless abandon, then he sings for the most part of the song. He says that people should be careful and not throw their destinies away. He reiterates a line used in the second track of the album We Must Groove to explain his point.

The fourth track of the album Carry Dey Go carries a faster tempo in the instrumental and he increases his pitch and speed to go along with the instrumental. He sings about a girl and how he is infested with her body and the way she moves her body “no go kill person oh”. This is very different from his former style. This song is another example of 2Baba’s ability to adjust and acclimatize to recent styles of music. The legend flows effortlessly on the track, the song is highly reminiscent of an Orezi or Sean Tizzle track of 2014. This is definitely a joint for club goers and fun seekers as it evokes loose emotions which ignite fire and blood on the dance floor

Kitty Kat, the fifth track of the album is a bit like a freestyle, a song included in the album to complete the numbers. He expresses his lust for a girl “I wan play with your kitty kat”. The Jay Sleek produced beat is heard for a large part of the song as if awaiting consumption by another industry heavyweight.


The sixth track off the album Opo starts off with a Starboy chorus and verse alongside the mellow Black Jerzee produced instrumental. 2Baba jumps in heavy with a lot of ginger as if not enjoying the calmness of the song to give it a mixed vibe. The two industry top dawgs reveal their intentions to a girl asking her to reveal her intentions and not pretend or throw hints. Wizkid is heard on some lines bragging “Soundman be the king number one with it”.

Previously released Amaka with Huncho vibes, Peruzzi Vibes sits at number seven on the albums tracklist, one of the top songs that put the pon pon sound on the map in 2018 and also one of the best collaborations that year and 2019. The song is one of the few songs that kick-started Peruzzi’s career as his strong vocals and punchlines were not left in the dark” I no two face oh, I dey straight forward”. In this song the two lovers show their disappointment at their lover for promising that she will show up and not showing up at the end of the day after all the arrangements were already put in place. They do this with a calm, relaxed instrumental from Golden Boy Entertainment’s Speroach

Love Me, Love Me, the eighth track off the album is a calm song with soothing lyrics and a mellow instrumental. 2Baba comes in with his mother tongue on two occasions bringing in sugar and spice to the P Banks produced song. He is heard sampling Fela Kuti’s Sorrow, Tears and Blood where he says “I no want shout, I just want sama just make me to feel e fine I want you to blow my mind”. He professes love to a girl and demands the girl to love him just as he does her.

Ginger, the ninth track off the album is assisted by Tiwa Savage, the songstress starts off the song with her sonorous voice as she takes the chorus. She tells her lover not to kill her vibe, she seeks for his loyalty, 2 Baba however comes in and tells her she has nothing to worry about that she is his “from today I no go send anybody but you” and she should put all the fears in her mind all behind.


On the tenth track Target You 2Baba pours out his heart towards his crush saying that it’s because she is different from other girls that he chooses to be with her. He tells her that she should remove any thought from her mind that he is going to cheat on her nevertheless she plays hard to get even though it is obvious that she is into him. He is assisted on the track with lovely vocals from Syemca who was one of the singers on The Voice Nigeria, a show in which 2Baba was one of the judges in the first season. 2Baba samples P Square’s Do Me towards the end of the song.

Oyi, the eleventh track and one of the previously released singles on the album is a calm mid-tempo song that talks about everyone being at peace with each other and being calm, avoiding pretence at all costs. He is assisted on the track by his brother Hi Idibia who repeats what 2Baba said in his own words.

I Dey Hear which is the number twelve track on the album is assisted by Olamide. On the track which is not up to two minutes, 2Baba shows his insecurity saying “I Dey hear everything wey you dey tell me but na the one wey you no dey tell me na e dey fear me pass”. He seeks for the attention of his lady, he wants her to share everything with him so that he won’t have doubts or make assumptions. Olamide repeats the message in his own words telling his lady “baby I know I am not the perfect guy mama but if you are waiting for the perfect guy mama you go wait till the judgement day, na Jesus Christ na im be perfect guy”.

If No Be You the last track of the album sounds like a “2Face” track. It takes us back to the days of his early albums. It is a tribute to God and his fans. It is the perfect song to end the album with. He delivers effortlessly with his ever-ardent vocals on the Bolaji Beatz produced track.


The body of work to a large extent juxtaposes the two sides of 2Baba, the 2Baba side and the 2Face side showing the legends versatility and ability to still give the younger generation a run for their money.