Why we demolished houses on revoked lands—Edo govt
Posted by 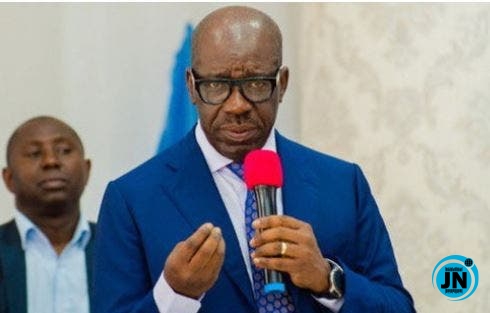 My property does not a gift from Oshiomhole, I followed due process —Ihonvbere


BENIN CITY—EDO State government, yesterday, justified Tuesday’s demolition of the property of the immediate past deputy governor of the state, Dr. Pius Odubu, and those of Professor Julius Ihonvbere, former Secretary to the State Government, SSG, and current House of Representatives member and Mike Itemuagbor, sports promoter, saying that the property was recovered for the use of the state after their Certificates of Occupancy, C-of-O, were revoked alongside that of Governor Godwin Obaseki.

But Ihonvbere denied receiving his house in Benin City, which was demolished on Tuesday by the state government as a gift, saying that he followed due process and procedure to acquire the land.

A statement by the Secretary to State Government, SSG, Osarodion Ogie, said that the C of O of the property was revoked on December 21, 2020, because they were gifted out as parting gifts by the immediate past governor of the state, Adams Oshiomhole, to former political office holders, companies and private individuals.

He said: “On December 21, 2020, Governor  Obaseki, revoked the C-of-Os of 11 government property within the Government Reserved Area (GRA) which were allotted to former political office holders, companies, and private individuals as parting gifts on the eve of the exit of former Governor Oshiomhole from office. One of the properties was allocated to Governor Obaseki and was also revoked.

“It is instructive to note that one of the properties in question to which a former Deputy Governor of the state, Dr. Odubu, lays claim to the official Lodge of the Secretary to the State Government of Edo State.  The implication of this is that all SSGs after Oshiomhole’s administration will not have an official residence.

“On whether the recovery of the property was a vendetta? The truth is that these are the only remaining property in the GRA that belong to the state government. If they are allowed to be taken over by these private individuals, it means that when the government wants to embark on any project within the GRA, it will have to resort to purchasing from the open market.

“The governor has a fiduciary responsibility to protect and act in the best interest of the people of Edo State and will never betray the public trust they have reposed in him.”

Meanwhile, former deputy governor, Odubu could not be reached for a reaction but a close aide told Vanguard, “There is no reaction on this because the matter is already before a competent court of competent jurisdiction and Dr. Odubu is a party in the suit.”

My property does not a gift from Oshiomhole —Ihonvbere

On his part, Ihonvbere said, “I applied for the land through the relevant ministry, paid the sum of N5million to the Ministry of Infrastructure in the Obaseki administration and relevant bodies and approval was given.

“I also paid ground rent for the property. I cannot understand while my property was demolished and my C of O revoked because there are other buildings closed to mine still standing and nothing was done to them.

“I don’t have much to tell Obaseki, he has already destroyed the building but he should remember that it was his administration that approved my Certificate of Occupancy after I paid all the necessary fees during his administration.

“There is a building behind mine, why did he leave that? There is another building adjacent to mine, owned by a former National President of the Nigerian Bar Association, NBA, why did he also not revoke that if he is claiming the lands for the state?  That is why I said what he is doing is political vendetta.

“I have decided to leave everything in God’s hand and nobody will be governor forever.”

Why we demolished houses on revoked lands—Edo govt