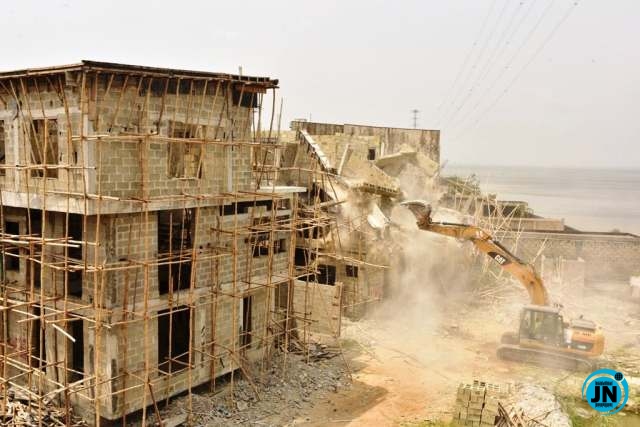 One of the demolished buildings.

Lagos State Government, yesterday, embarked on demolition of illegal structures and eviction of occupants in Banana Island in highbrow, Ikoyi and Eleko, Ibeju Lekki area of the state without compliance to the state building laws and regulations aimed at restoring its shorelines.

The state government enforcement team led by the Commissioner for Physical Planning and Urban Development, Dr. Idris Salako, during the exercise, removed buildings, including three two-story buildings under construction for lack of approval that encroached on the state shoreline.

Salako noted with dismay, the flagrant disobedience of building regulations in the state, hence, the government's decision to go ahead with the enforcement of structures in contravention of the law.

According to the commissioner, the developers of the homes had earlier been served stop-work notice by the Lagos State Building Control Agency, LASBCA, warning that “ the state government will not condone flagrant abuse of the state building laws and shoreline because it has noticed many residents are building a property without due recourse to state agencies for approval.

“The gradual takeover of the waterways is a problem. In our master plan, the regional highway ought to pass through this route but there is gradual encroachment on the way.

“In terms of climate change, gradual reduction in the capacity of the lagoon to flow freely and the consequence the state would be made to grapple with in the future. If there is a heavy downpour today, residents in Parkview Estate, on the other side of the lagoon, would be in crisis because their community would be flooded. This is because people built beyond what was approved.

“The enforcement became necessary because the state government felt there is the need to do something to halt the illegality.

“The governor was here yesterday with the strong instruction that land reclaimed beyond what was approved should be demolished. We would continue to monitor to ensure that building laws and regulations are complied with and it should even be voluntary compliance.”

Explaining the rationale behind the demolition of the two-story buildings, Salako said:” The buildings were pulled down because the owner and developer could not provide approval and clearance to reclaim land before the meters he got from the state Land Bureau and Ministry of Waterfront.

“They blew up their survey, this means more land meters were taken than what was given approval for. And the 30 meters set back the development was to observe was not adhered to. Also, the property is under high tension wires. In all, the development has flaunted all building laws in the state.”

The commissioner said before the enforcement exercise was carried out, the developer had been served stop-work notice thrice.

“Sometimes last November as part of our monitoring and enforcement, we were here to mark the buildings for stop work when we noticed that they were not building right and we advised them to build right.

“Even if you have some approvals, the LSBCA needs to give the approval to construct and the agency needs to supervise the construction work at every stage of building. Even one of the structures pulled down is not fit for habitation,” Salako said.

Apart from buildings and fences that were pulled down, some persons doing dredging activities were also arrested.

Also, the Commissioner for Waterfront Infrastructure and Development, Ahmed Abdullahi said the state government cannot continue to fold its hands and watch the degradation of its environment.

On the demolition of illegal structures at Kayetoro, Eleko, in Ibeju-Lekki, Salako said that the move was in line with the government’s pursuit of its policy on a cleaner environment and restoration of master plans through the removal of all environmental infractions and nuisances across the state.

“It is quite worrisome that ramshackle structures, sheds, canopies, and shanties, especially along shorelines have turned to the abode of miscreants/street urchins, kidnappers, touts, street traders, and hawkers who often vandalize public utilities and attack innocent citizens.

“The State’s Urban and Regional Planning and Development Law 2010, prohibits erecting structures within the Right of Ways and setbacks of drainage channels.”