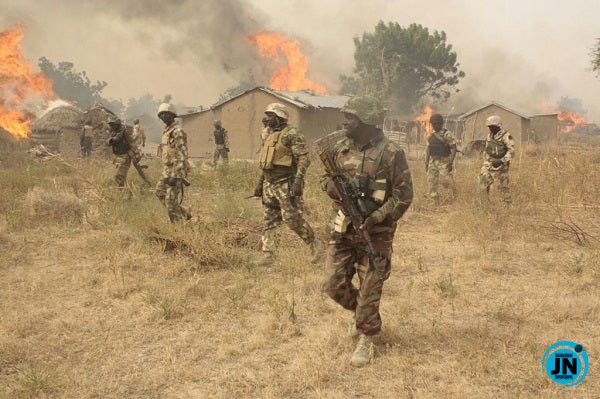 Elements of Boko Haram Terrorists and their Islamic State West Africa Province (ISWAP) counterparts operating along the fringes of Lake Chad and the Tumbus met their waterloo when they encountered dogged troops of Sector 3 Operation Lafiya Dole on Saturday, 13 March 2021.

The combined troops of the Sector which were on clearance patrol along the fringes of the Lake Chad had advanced and cleared Daban Massara and Ali Sherifti villages among other settlements before they harbored for replenishment and retrofitting.

However, as they commenced the second phase of their operations and advancing along the Kukawa – Monguno road, about 14 kilometers to their base, they sighted BHTs/ISWAP gun trucks and swiftly commenced pursuit with heavy fire and deft maneuver.

A statement by Brigadier Gen Mohammed Yerima, Director of Army Public Relations disclosed that “In the course of the hot pursuit which was aided by air cover provided by the Air Task Team of Operation Lafia Dole, several terrorists were neutralized and their gun trucks destroyed.

“Unfortunately, however, 1 officer and 3 gallant soldiers paid the supreme sacrifices while those wounded in action are currently receiving medical attention at 7 Division Medical Services and Hospital in Maimalari Cantonment.

“Above is an on-the-spot account of the encounter between Nigerian troops and the Boko Haram/ISWAP terrorists in the Mugono area and environment.

“Members of the public are assured that the troops are on top of the situation and working assiduously to end the insurgency and terrorism in the country in line with the directives of the Chief of Army Staff.”

Ganduje mourns as Kwankwaso loses father
Mercy Eke loses dad
“You were my biggest fan; I will miss you” – Lasisi Elenu mourns as he loses his mum to prolonged illness
Singer Jaywon Loses His Dad