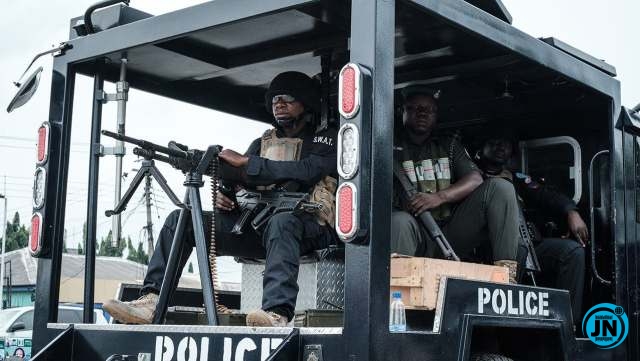 The victim's father threatens to commit suicide if,

There is panic as a policeman identified as Inspector James, a Marine Policeman, has gunned down a civilian security guard attached to a company at Abonnema Wharf in Port Harcourt City, Rivers State, Mr. Gospel Gbaraka.

This was as the father of the slain security guard, Mr. Innocent Gbaraka, has threatened to commit suicide if justice was not done in the matter as quickly as possible.

However, it was gathered that Gospel, who hails from Gwara Community in Khana Local Government Area of the state, was killed by the trigger happy policeman at his duty post in the premises of Bulk Strategic Reserve Limited, on Sunday.

Although, the reason for the shooting has not been ascertained at press time, as there has not been any formal statement from the company where both the killer and the victim work, but it was gathered that the policeman had shot the victim out of anger.

Speaking, Mr. Innocent Gbaraka, father of late Mr. Gospel, said he would commit suicide if the killer of his son was not brought to book, adding that the murdered Gospel was his only hope.

“I was in church when somebody came to call me that my son who left for work has been killed. I thought it was a joke. He took me to UPTH where I saw my son in uniform lying dead.

“When I asked the supervisor of the company what happened, he said a policeman working in the same company with my son shot him dead. I don’t know what my son did that he killed him.

“I don’t have anything to say then let justice prevail. I don’t have anybody that I why I am crying that a boy I suffered to train. I am finished. He was my only hope. If not for my wife I would have hanged myself because I don’t know what I am doing here again. I will hang myself if justice does not prevail,” he cried.

Meanwhile, the Centre for  Basic Rights Protection and Accountability Campaign, CBRPAC, has called for an immediate and unbiased investigation into the incident to unravel the circumstance that led to the shooting of the deceased.

Secretary Board of Trustee, CBRPAC, Prince Wiro, called on the Police Authority to ensure the investigation is concluded in record time and anybody found culpable be made to face the law.

Meantime, the Police have not issued an official statement on the development, but it was gathered at press time,  the Police officer alleged to be responsible for the killing has been detained at the Divisional Police headquarters in Mile 1 Diobu.

However, youths under the platform of Ogoni Youths Federation, OYF, have demanded justice for their murdered brother, urging the Commissioner of Police in the state, Joseph Mukan, to order an immediate investigation into the development.

In a statement in Port Harcourt, Comrade Legborsi Yamaabana, the President-General, Ogoni Youth Federation, said the youths were in shock over the news, wondering what had led to the shooting when there was no problem between the victim and the policeman.

Yamaabana said: “The Ogoni Youth Federation (OYF) worldwide today Sunday 22nd November 2020 received the distressing and shocking news of the extra-judicial murder of one of its youths and shining lights, Mr. Gospel Gbaraka at the hands of a gun-wielding member of the Nigerian Police Force, one Inspector James, serving at the Marine Base Police Station in Port Harcourt, Rivers State, now being detained at the Mile One Police Station.

“Gospel Gbaraka was on duty at his security post this morning. The said Inspector James is also a police security personnel attached to the company.

“There was no altercations, riot, or crisis situation at the company involving groups of persons requiring the use of live bullets to disperse crowds, neither was there any existing problem between the deceased and Inspector James.

“As a youth body, we are incredibly pained that the life of this young man has been taken, particularly now that Nigeria is at a crossroad and the world has been awoken to the demands of #EndSars protesters whose focal point is to end the recurring decimal of police brutality and extrajudicial killings.”