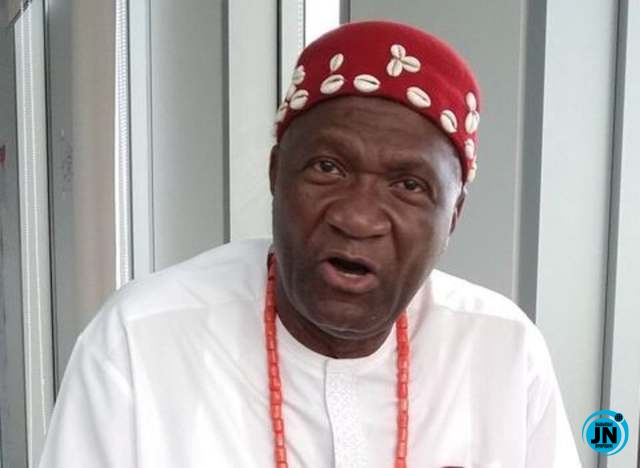 Against campaigns of calumny makings the rounds that the President General of Ohanaeze Ndigbo, Chief Nnia Nwodo has in connivance with some Imo state stakeholders, secretly selected his successor, Nwodo has denied the allegation, saying that such practice was not possible going by Ohanaeze’s method of election of the executive.

The Nwodo-led executive committee of the Igbo parent body expires in January 2012 after two consecutive terms of leadership.

Recently, Interest persons and groups have taken to various platforms to insinuate that Nwodo in conspiracy with some stakeholders in Imo state has anointed his successor.

Angered by such blanket allegation, Nwodo through his Media Adviser, Emeka Attama in a statement on Monday clarified on the allegation, advising his traducers to always ask questions when in confusion.

The statement reads: “The attention of Ohanaeze Ndigbo Worldwide has been drawn to a spurious, mendacious and malicious news item making the rounds that a candidate has been chosen to occupy the post of the President-General of the apex Igbo socio-cultural organization, which by rotation, is now the turn of Imo state.

“The said vexatious piece would have been ignored for the chaff it is but for the fact that it impinges on the solid and time-tested tradition of Ohanaeze Ndigbo in choosing its leadership and the integrity of its present President General, Chief John Nnia Nwodo.

“The truth of the matter is that posts in Ohanaeze Ndigbo are rotational and positions zoned to States. It is the responsibility of States to chose their candidates which they may prune down for their convenience.

“Ohanaeze Ndigbo has the responsibility of organizing elections for all those who indicate interest and buy forms for the election.

“It is, therefore, preposterous and the height of mischief for anybody to write or in any way infer that Chief Nwodo went for Imo State stakeholders meeting in Chief Emmanuel Iwuanyawu’s office.

“Chief Nwodo couldn’t have been at a meeting of Imo State Leaders of Thought for the purpose of choosing a candidate for President General when he wasn’t invited and Ohanaeze didn’t organize it.

“Moreover, the decision at the meeting will not stop Ohanaeze from conducting the forthcoming election. As a matter of fact, Chief Nwodo has not visited Chief Iwuanyanwu since later’s birthday celebration last year. They only met recently at a meeting with the Governors of the South East over other matters.

“It is wrong for people to listen to an illegitimate, sponsored, and a disgruntled group of people masquerading as the Youth Wing of Ohanaeze.

“It is also a great affront to the dignity and image of Ndigbo for purveyors of these fake news intended to mislead the public to be taken seriously.

“People should verify such information from the office of the President General before accepting or releasing them unless some mischief is intended.

“As to the conduct of the election, an announcement will be made by Ohanaeze Ndigbo after the meeting of the Ameobi next week.

“Any current information or story about the forth-coming election remains the figment of the imagination of its purveyor. Any such story is, therefore, false, void, and puerile.

“No amount of innuendos and blackmail will deter Ohanaeze from bequeathing a virile leadership to Ndigbo.

“Ohanaeze Ndigbo Worldwide, under the leadership of Chief Nwodo, is committed to the inviolate tradition of conducting a free, fair, and transparent election to usher in its successors in January 2021.”