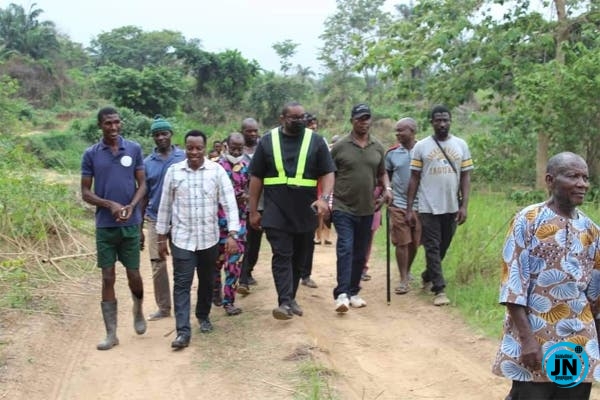 Following the directives of Governor Ifeanyi Ugwuanyi of Enugu State, a government team led by the Special Adviser to the Governor on Water Resources, Hon. Anthony Dubem Onyia and the Managing Director of EN-RUWASSA, Dr. Frank Omeje, yesterday, visited the Nvuna River that traverses four communities of Nomeh, Unateze, Mburumbu, and Nkerefi in Nkanu East Local Government Area of the state, on a fact-finding mission.

There were reports that the Nvuna River, which is the major source of water for domestic activities in the four communities, has turned bloody and later blackish in color, with accusations and counter-accusations pointing at bandits and fishermen.

An Ethanol production factory located at Ituku/Ozalla, Enugu State, known as D-HAP Enterprises Services Ltd, which sources water from the Nvuna River was also suspected to have allegedly discharged effluent into the river.

Complying with Gov. Ugwuanyi’s directives, the state government’s team, after their on-the-spot investigation, established that there was indeed contamination.

They collected water samples for laboratory tests, in line with international best practices.

Addressing the people of the communities, the Special Adviser on Water Resources, Hon. Onyia, identified with them and expressed the governor’s deepest concern and commitment to addressing the issue, as well as mitigate the challenges they are facing.

The governor’s aide, who advised the people of the communities to avoid water from the river, added that the state government is already considering emergency interventions such as drilling of boreholes for the affected communities prior to the river cleanup exercise, among others.

Hon. Onyia disclosed that the state government will constitute further sanction as soon as laboratory tests and more contact tracing are completed.