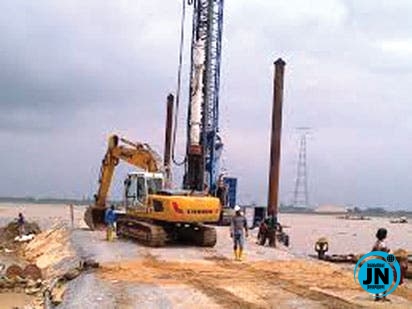 Julius Berger Plc has reassured the use of highest international quality materials and  timely completion of second Niger Bridge despite  the challenges being faced, just  as President Muhammadu Buhari has endorsed the progress of work being progressively achieved at the Second Niger Bridge saying that, “the project is on course irrespective of initial teething problems that occasioned some loss of time.”

The Honourable Minister of works and housing, Babatunde Fashola, SAN, who represented the President, spoke in Asaba weekend at the inspection/town hall meeting on the landmark priority project stating that 2022 remains the completion period.

The President communicated his position on the project, just as Anambra State Governor, Chief Willie Obiano, and his Delta state colleague, Dr. Ifeanyi Okowa lauded the project amid expectations of speedy and timely delivery.

A statement from Julius Berger quoting Fashola said, “2022 remains the project delivery date. That is the Federal Government’s commitment to the N414billion Bridge investment by the government. Of this amount, Roads 2a and 2b alone is costing the government N208billion.”

Fashola revealed that: “The contractor needs about 4million cubic meters of sand, a lot of supplies of cement, 19 million liters of diesel including local labor to deliver the project,” adding that all of that is already spinning off multiplier economic and commercial activities within the host communities and states. On compensation to the communities in the project area, Fashola said state governments are in the best position to liaise with communities on behalf of the Federal Ministry of Works and Housing

Speaking, the Managing Director, Julius Berger Plc,  Lars Richter said: “We at Julius Berger have a proven track record of successfully completing work on time, no matter the challenge. We continue to set standards for technological leadership in the construction sector and seek to pioneer state-of-the-art construction methods and technologies, as we have in the Second Niger Bridge, to ensure that value-driven innovations are prioritized for the benefit of our clients and the country at large. Our reliability and quality of works continue to stand the test of time. I am confident and without doubt, that with the strong commitment of all stakeholders and the support of our host communities, Julius Berger will unfailingly deliver on the project requirements on time and up to the highest standards; up to Julius Berger standards”

Meanwhile, the statement said  Chief Obiano observed, for instance, that: “Covid-19 or no Covid-19, we can all see that the President, the Honourable Minister and his team at the Federal Ministry of Works, and Housing as well as the contractor, Julius Berger Nigeria Plc, have remained committed to the work to deliver the second Niger Bridge.” Chief Obiano added, “Even while evidently proactively observing all NCDC prescribed and necessary human protection and safety protocols, the contractor has steadily continued to incrementally build the second Niger Bridge to the admiration of all stakeholders”

While the Governor urged Julius Berger Nigeria Plc to within its Corporate Social Responsibility considerations, address any pending issues with the communities, he called on all stakeholders to “support the Federal Government’s initiatives and restrain the restive youths from actions that could hinder the progress being seriously recorded on the project.”  The progress of the ongoing works by the contractor, said Governor Obiano, can only be sustained to full success where peace is purposely allowed to reign on site.

Delta State Governor, represented by the Secretary to the State Government, Dr. Chinedu Ebie, thanked President Buhari for “the massive project and the good progress achieved so far on-site as we look forward to the successful commissioning in 2022.”