"You Say You're African Giant, Prove It" – AKA Tells Burna Boy | JustNaija

"You Say You're African Giant, Prove It" – AKA Tells Burna Boy.

Nigerian singer Burna Boy is set to perform alongside other artistes at a music concert set to hold in South Africa on the 24th of November . This is coming after the AFRICAN GIANT vowed never to step his foot in the country except the governments did something during the heated Xenophobic attacks on Nigerians months back.

Some South African artistes, under the aegis of Tshwane Collective initiated a protest against Burna Boy whom is scheduled to perform in the country demanding an apology from him before entering there country.

Following the protest, SA rapper AKA has also demanded an apology from Burna Boy over their altercation during the Xenophobic attacks in the country a few months back, telling him to prove the AFRICAN GIANT which he claims to be.

“Ek se..@burnaboy all we want is an apology. We know 🇿🇦 is not perfect. But we took you in as our own before you reached these levels. You say you are an AFRICAN GIANT, prove it.”, AKA tweeted.

See the series tweets AKA left below; 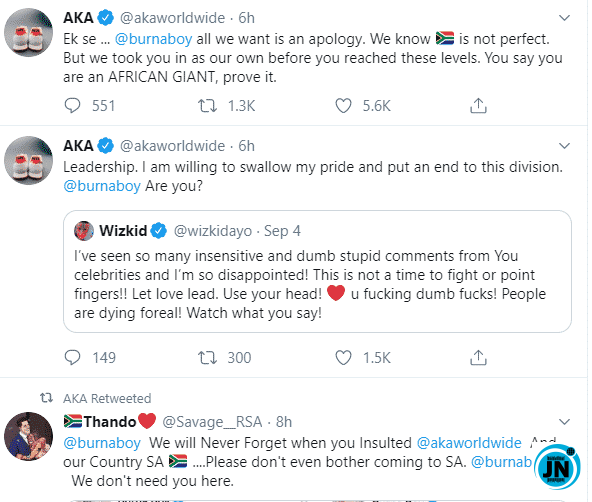 TAG : BURNA BOY AKA
Comments
Mumu he has proved it, he proves it and he's proving it