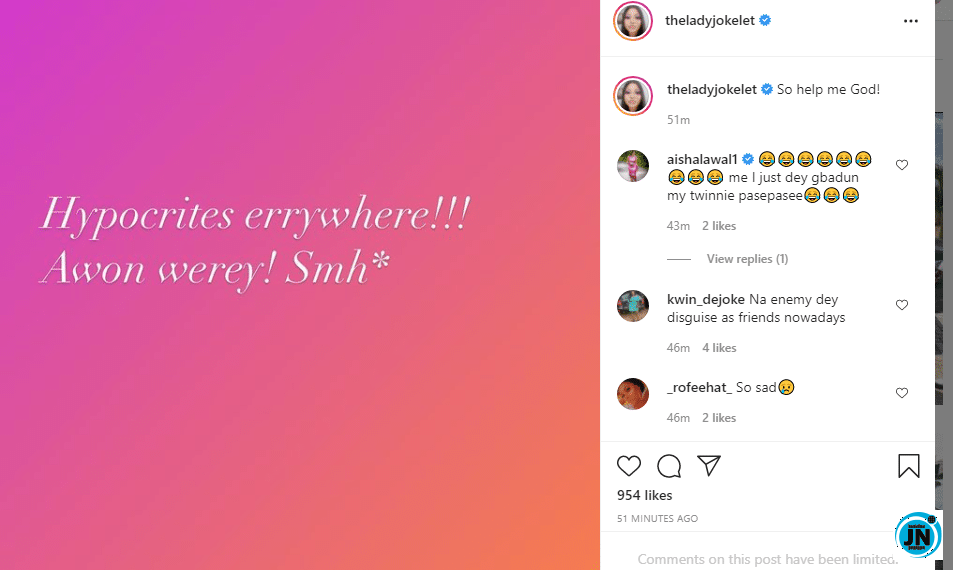 Actress, Joke Jigan has taken to her official Instagram page to shade Omo Brish amidst her unending beef with her former best friend, Iyabo Ojo.

Joke’s reaction comes after controversial Instagram blogger Gistlover shared an update to some of the issues surrounding their separation and call out on social media. In the voice note shared, Omo Brish alleged Iyabo Ojo faked the car she bought for her former PA/manager Gbemisola who Iyabo Ojo claimed almost ruined her business.

According to Omo Brish, she bankrolled the movie ‘Under The Carpet’ and Iyabo Ojo boycotted her and refused to give her any credit but claimed the sole ownership of the movie adding that she frequently sponsored Iyabo Ojo’s trips to London and shared her salaries with her during their good times.

The UK based also alleged that Iyabo Ojo is always in the habit of engaging in fake surprises to impress people on Instagram.

All the secrets Omo Brish leaked about Iyabo obviously did not go well with Joke and according to the mother of one, hypocrites are everywhere.

Popular Singer, Yemi Alade Shares The Secrets To Her Beauty
Harrysong Threatens To Spill Secrets About His Exit From Five Star Music
Screenshots of Wizkid and Banky W clashing with each other and spilling secrets, surfaces
Mercy Aigbe and husband, Kazim Adeoti make first magazine cover, spill secrets about their marriage (Video)