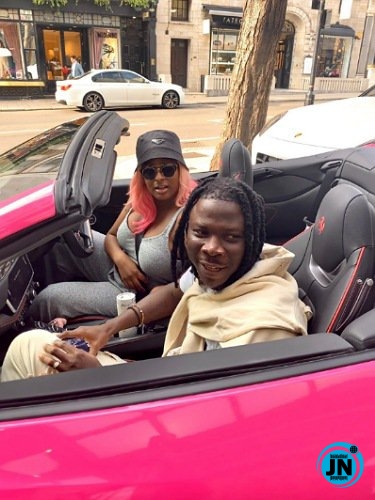 DJ Cuppy whose real name is Ifeoluwa Florence Otedola made this known on her various social media platforms – Instagram and Twitter.

The popular Ghanaian singer went to London for the video shoot of one of his songs, Karma, in which he starred DJ Cuppy.

He shared the video of the ride on his Instagram page while DJ cuppy shared short video clips on the insta story section of her Instagram page.

Recall DJ Cuppy’s billionaire dad, Femi Otedola recently took his three daughters out on a shopping Spree, and bought them one Ferrari each.

Otedola’s Daughter, Tolani Takes To The Streets Of London To Protest Against Racism
Congratulations pour in as Wizkid sold out London’s O2 Arena in 12 minutes
Toyin Abraham Storms London With Family For Vacation, Complain Of Too Much Cold (Photos)
Zlatan and his baby mama, Davita, celebrate their son’s first birthday in London