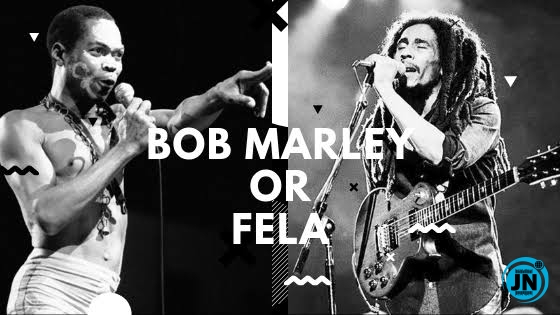 Who Is Fela Kuti?

According to Wiki, Fela Anikulapo Kuti was a Nigerian multi-instrumentalist, bandleader, composer, political activist, and Pan-Africanist. He is best known as a pioneer of the Afrobeat genre, a blend of traditional Yoruba and Afro-Cuban music with funk and jazz. Born: 15 October 1938. Died: 2 August 1997.

Who Is Bob Marley?

Robert Nesta Marley, OM was a Jamaican singer, songwriter, and musician. Considered one of the pioneers of reggae, his musical career was marked by fusing elements of reggae, ska, and rocksteady, as well as his distinctive vocal and songwriting style. Born: 6 February 1945. Died: 11 May 1981.

There is no comparison between them because they were both musical giants. Besides their genres of music are not the same. Fela is an Afro singer, while Bob a reggae Artist. So It will be very hard to compare or differentiate between the two music Icons.

But Bob Marley tended to be more spiritual, while Fela was prophetic, psychological, and even political to an extent. Fela was like any prophet that wasn’t appreciated in his own town but gained worldwide acclaim through his music and the message that came with it.

They both came to the world as messengers to impact change in their time differently. Just Burnaboy, Brymo, Asa, 2face, and Co.

Honestly, I don’t know. I will allow you to answer that. Over to you all Fela And Bob Marley lovers, followers/fans.

Sinach – Greatest Lord Lyrics
AFRO/REGGAE LOVERS!! Between Fela Kuti & Bob Marley, Who Was The Greatest While Alive, With Largest Fan Base Even In Grave?
‘The Greatest’ - Fans Hail Wizkid For Being The First Nigerian Artist To Achieve This In Canada
‘Save For Rainy Days, God Is The Greatest’ - Nigerians Reveal What They’ve Learnt During Lockdown