Nigerian Nollywood actress Etinosa Idemudia known for her controversial behaviours, has made it to the headlines again after she demanded the sum of N10M naira from an Islamic poet that dared her to use the Quran as an ashtray.

Recall that days back, Etinosa was seen smoking weed on her Instagram live, and used the Holy Bible as an ashtray which she's been receiving lots of backlash fornsuch act.

An Islamic poet in a recent video, dared the actress that she can't try such with the Holy Quran, stating that she will witness horrible things if she tries such an act with the Quran.

Etinosa has however replied the poet, and requested for the sum of N10M and she will also use the Quran as an ashtray as she did with the Bible.

Below is their exchange; 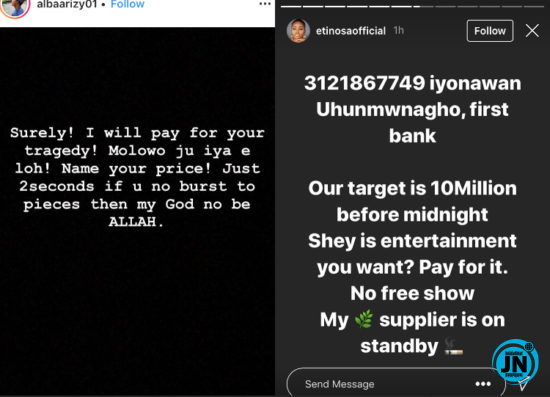 You are a waste of sperm, spoilt brat, wasted child, cursed child y cant u use ur ouw religion book as an ashtray

Dablixx - In The City

Yung L - Light It Up

Joeboy - All For You