The falling world as a very young child, tells the mother about his breakup with his supposed girlfriend, And how it has drained him emotionally. In the Viral Video, that is breaking the heart of all on the internet, over the indiscipline of the mother and lack of proper attention and discipline to the child, The little boy, was filmed by his mother as he narrated how his girlfriend broke his heart. 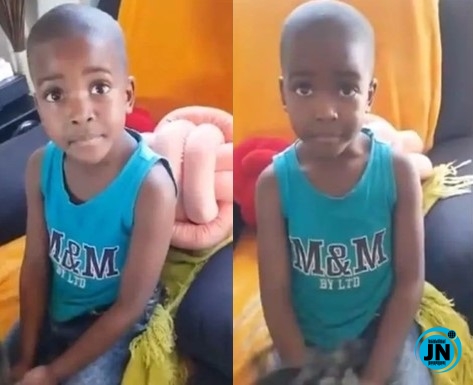 Twitter user, @aypee_madicks shared the video which showed the lad revealing he was dumped for someone else.

“Mum, you see that girl that I used to love. She broke up with me. She likes the new boy now,” he could be heard telling his mum.

Showing support to him, the mother then asked her son him if he was okay, to which he simply responded by shaking his head.

She went further by asking if he spoke to the girl and the boy said: “She says she doesn’t love me anymore.”

@romanciaga : “I’m glad the young king has a mom who lets him cry, healthy expression of his hurt and disappointment. Good job mama.”

@marlonizzle : “Just thought about the problems I faced when I was his age. Umjolo was nowhere near my issues. The young King is gonna bounce back.”

@PitsiAfrica : “Continue to nurture this relationship, him being open up with you. Yazi we cried in our rooms whilst our moms shouted us cze dishes needed to be washed, and couldn’t tell them we are not okay…”

The supportive mother later shared an update, revealing her little man is healing following his heartbreak.

“My Mine is here” – Heart-warming moment 2baba reunited with his wife, Annie after weeks apart
BBNaija couple, Bambam and Teddy A melt hearts as they serve couple goals | (Watch VIDEO)
#BBNAIJA2020: Laycon Reveals He’s Not Going To Relent, On His Quest To Win Erica’s Heart. (VIDEO)
‘She taught me the meaning of sacrifice’ – Mercy Aigbe’s daughter pens heart touching message to her on 43rd birthday