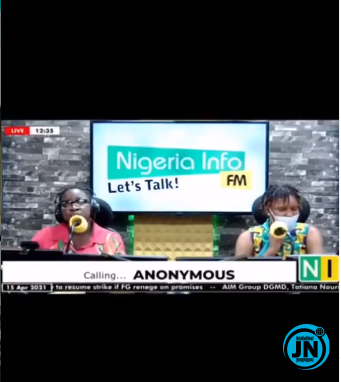 A Nigerian man has left social media users stunned with the story of how he had a one-night stand with his mother-in-law, who later got pregnant.

The man spilled the details of his sexual rendezvous with his mother-in-law in a call-in show on Nigeria Info. According to him, he met his mother-in-law whilst still engaged to her daughter (his present wife).

He said they had a great relationship and became very close. According to him, they hung out at an “entertainment spot” with other people and got drunk, and they eventually had sex on that fateful day.

He said his mother-in-law got pregnant and went ahead to have the child which she pinned on his father-in-law.

The man, who sounded remorseful on the call, expressed his regrets and asked for possible advise from listeners of the TV show.

“When I met my current wife, we were dating. Prior to that, she introduced me to her family and I got close to her mom who was too young for her age. One thing led to another, she started visiting me frequently.

So, initially, she started by visiting with food and drinks. I ran into her at an entertainment spot so we lost the chat. That evening while going back home because the driver took a while to pick her up.

I was really drunk and tipsy but she was stable. When we got to a place, I parked to pee and when I got into the car, we kissed and eventually had sex in the vehicle.

She got pregnant and later gave birth to a son although she never had any male son for her husband because her husband, his father-in-law has always been torn on her flesh.

But I went ahead to marry her daughter, my wife. “

Nigerian man narrates how he impregnated his mother-in-law who later gave birth to boy
#BBNaija: “I Don’t Want To Promise And Disappoint You Later On, I Think You’re Amazing” – Kiddwaya To Erica