Ned Nwoko called out for stripping wives of their rights through oath swearing, emotionally abused Laila
Posted by 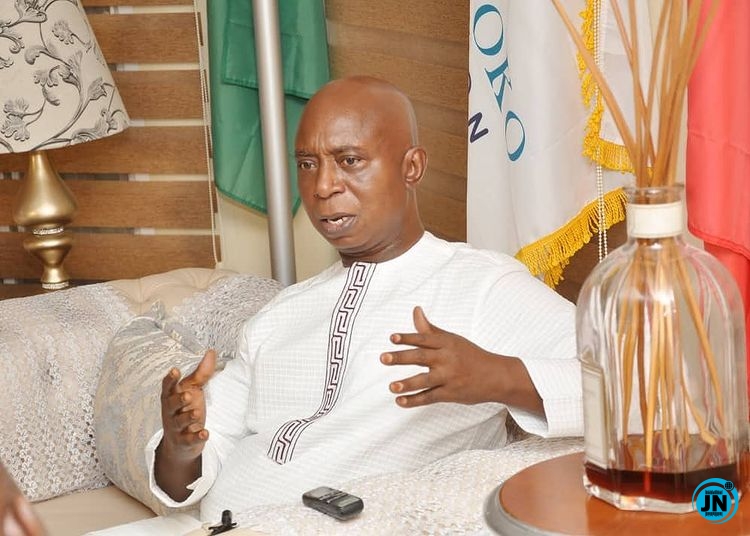 Popular businessman, Ned Nwoko is called out for emotionally abusing one of his wives, Laila Charani, and stripping others of their rights through oat swearing.

It would be recalled that during Regina Daniels’ wedding to the billionaire, she was made to swear an oath to remain loyal to her husband; a tradition that other wives went through too.

In reaction to the divorce saga going on between Ned Nwoko and Laila, controversial blogger, Cutie Juls condemned the billionaire’s unfair treatments towards his wives.

According to the blogger, Ned is as guilty of infidelity as much as Laila as a result of his affair with Regina Daniels before bringing her in as a full wife. 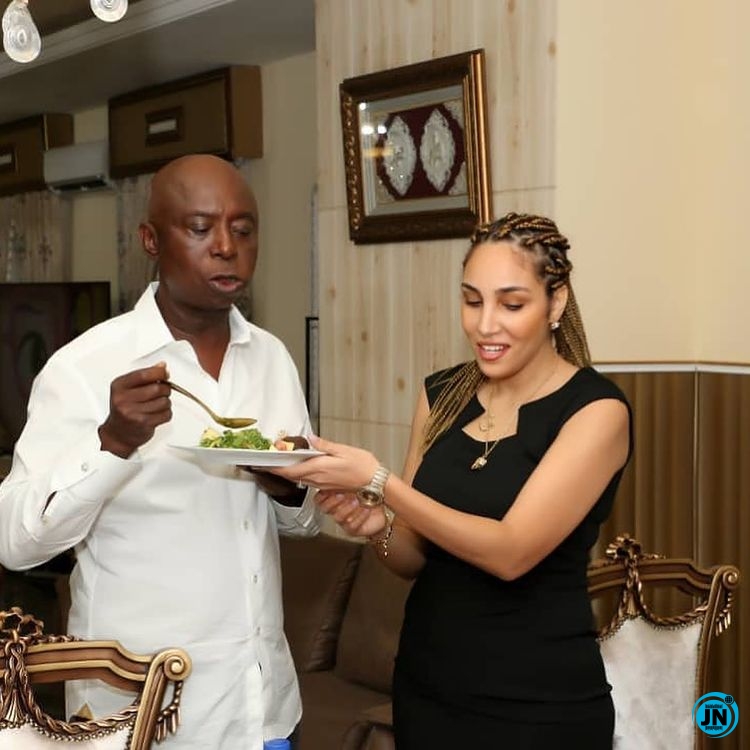 “It’s so unfair what this lady went through and Ned, his most current wife and team are doing so much to paint her like a bad woman so he can have full custody of their kids.

Ned, abused the rights of the women in his life by making them swear an oath via rituals that if they should cheat or remarry even after divorce, tragedy will befall them bla bla bla.

But on the flip side, he is at liberty to date, marry and do whatever he likes with his gbola and love life. This is so unfair.

Laila will be in the house and all communications between herself and her husband will be in English so everyone present understands what they are saying. But in her present, Ned and Gina will change language. Regina’s mom and especially brothers will come around and when they see Laila pass, they will say stuff in a language she doesn’t understand and then start laughing and giving her funny looks. She cried to herself and her husband severally but nothing was done about the whole ish rather than “oh they/we weren’t talking about you”

Come on, we’ve all kind of experience such one way or the other and we know how it feels when you walk into a group of people and they suddenly start speaking in languages you don’t understand and then starts making suspicious body languages.

This is so unfair. Emotional abuse at its peak.

We are not here to tell a grown man how to run his home but with all due respect, Pa Ned should know that being in a polygamous marriage means you owe it as a duty to treat all women fairly. If Laila chooses to bring up the issue of cheating in the divorce proceedings, she wouldn’t be far from right cuz he was seeing Gina as his concubine before he eventually married after she got pregnant which she unfortunately lost that very pregnancy then later God Almighty blessed them with a son.

Pa Ned is a lawyer and he should know better,” 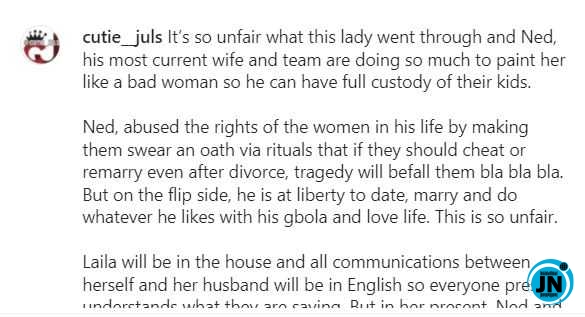 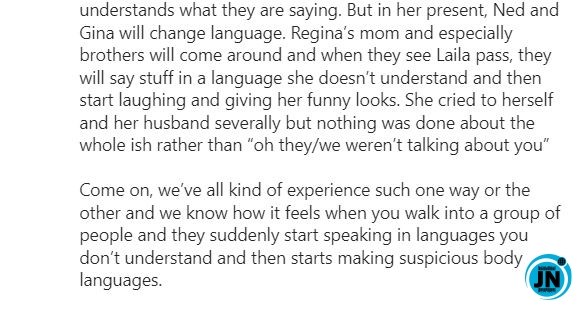 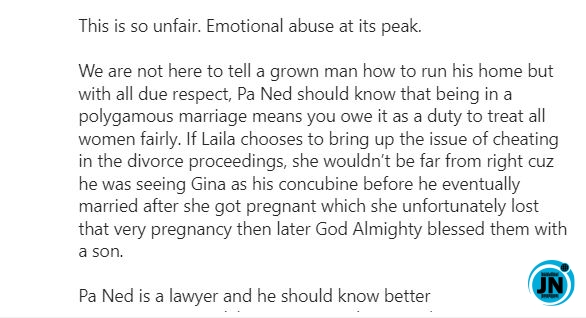 Singer Davido peppers a lady who abused him in a club in the U.S (Video)
“Christians have abused speaking in tongues, now easy to fake” – Uti Nwachukwu
Ned Nwoko called out for stripping wives of their rights through oath swearing, emotionally abused Laila