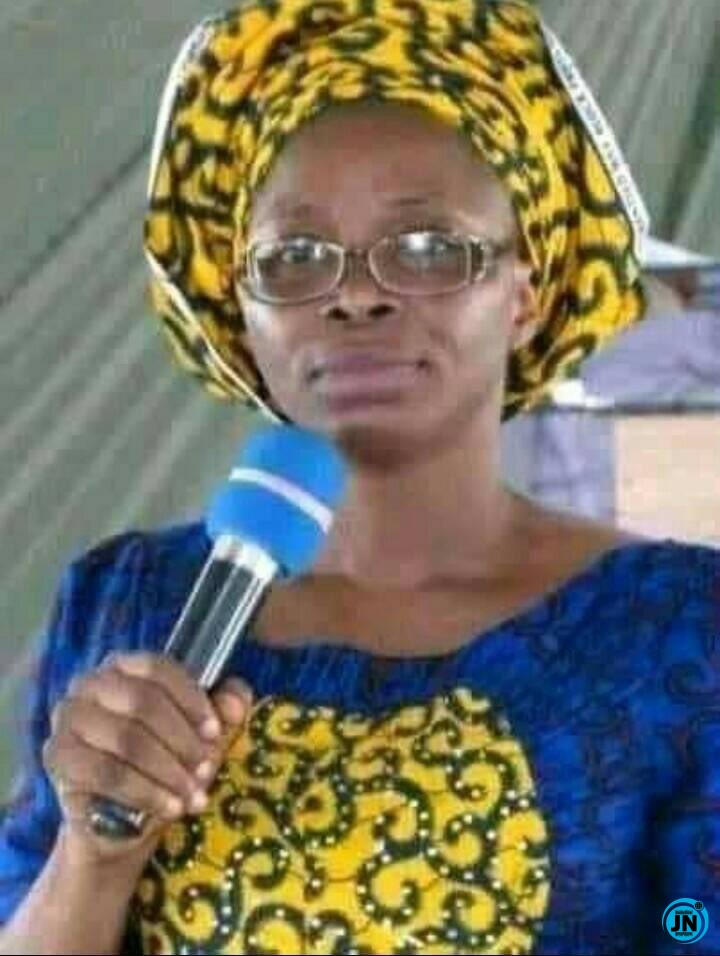 Controversial preacher, Evangelist Funmilayo Adebayo, a.k.a Mummy G.O, gets called out for allegedly ruining a couple’s marriage while keeping the man under her control for funding her church.

This comes amidst the series of controversies triggered by the evangelist in her videos on Christianity, which inspired curious netizens to pay her church a visit.

According to a Twitter user, @burnt_dodo, who shared her experience after visiting Mummy G.O’s church, the service was said to be attended by many journalists who have a thing or two to write about the preacher.

Read her narration below …

“I woke up early to visit this church. Asides the fact that ‘Mummy G.O’ is an online sensation, her church was not very far and shockingly, her son was an acquaintance. So you can imagine the determination. It was quite comical.Thread on my visit to Mummy G.O’s church.

To be honest, I was stunned with the size of the church. Expected it to be a tiny building. Wrong oh. It was very wide and a small building by the side was for the children’s church. As I parked and tried stepping into the building, I was stopped. Ghen ghen! 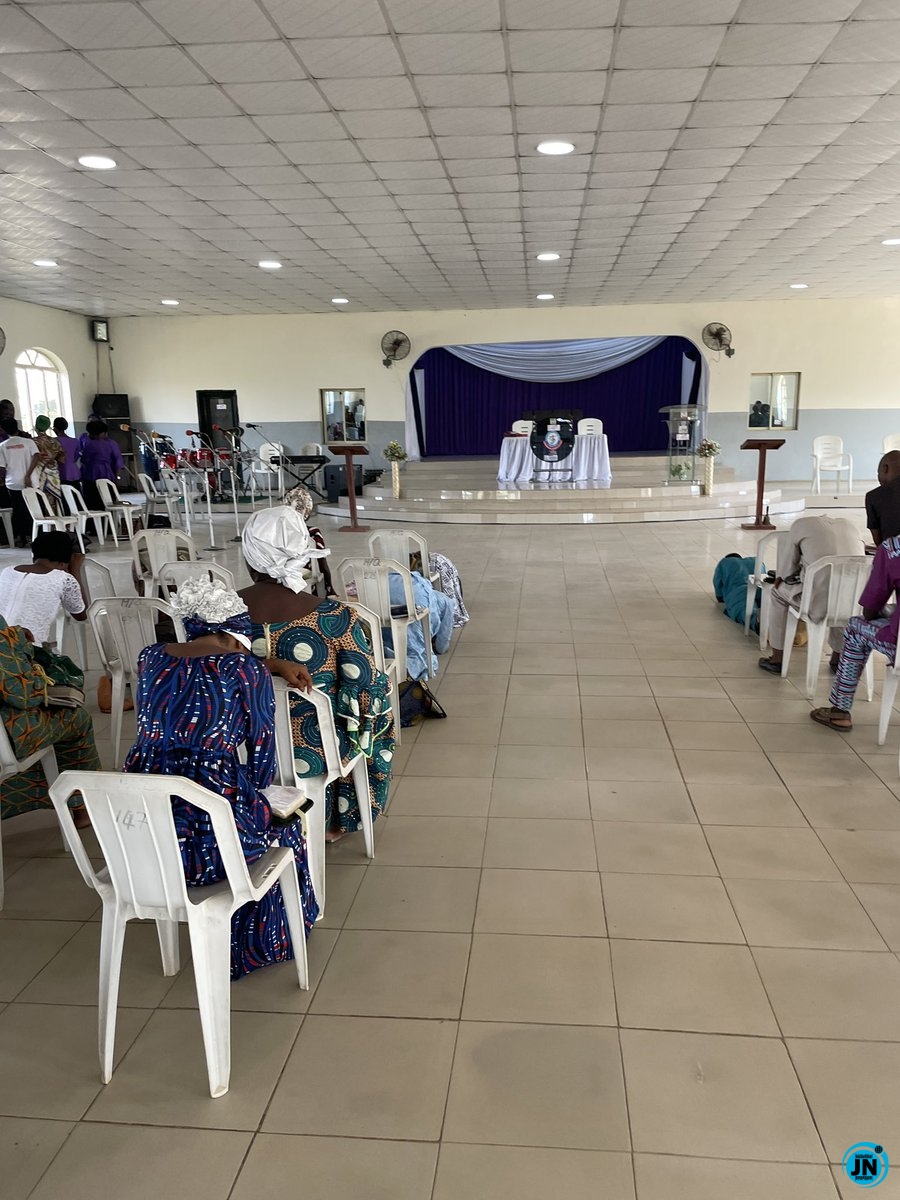 The lady at the entrance spoke yoruba to me. She asked me to please take off my necklace.😭 I forgot to remove my bling bling. I begged her to help me take it off and she seemed pleased. She told me how she expected me to argue as many did. Ma’am I came for cruise. Take it off.

Then I noticed this at the entrance. In this type of situations, you have to comply, you don’t need no drama. My scarf slid up and she sighted my earrings. She called me back. 🤣she helped me take those off too. I was just very calm and I kept smiling at her. I was here for mummy 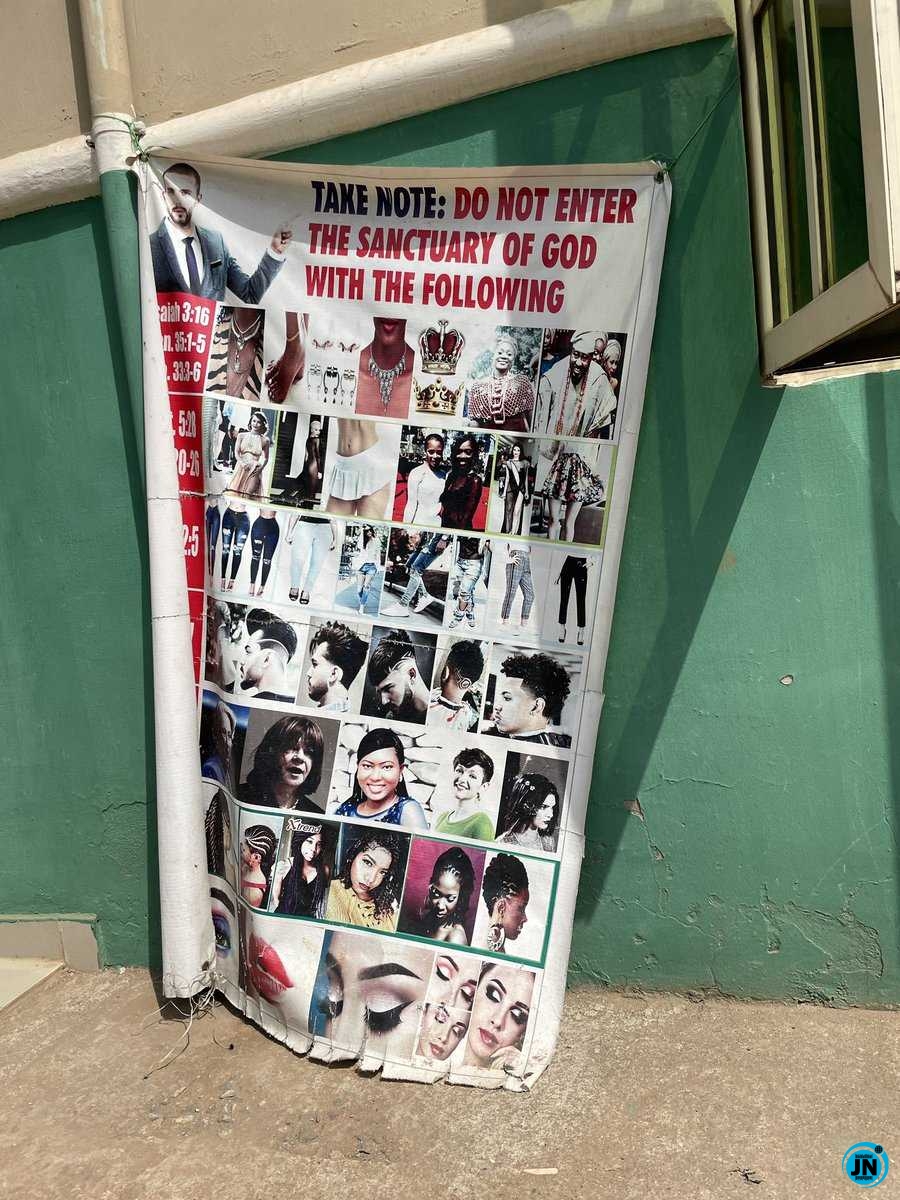 I entered and found a suitable place to sit. I was right on time. It was Sunday school. I noticed something,they were so keen on the preaching of ‘End Times’. I surveyed the crowd. Well, it was a small crowd. Men one side, women one side. Youths were so few and I wasn’t surprised It was full of way older people and more women than men. The choir in dark purple attire. Fashion was missing, nobody cared on how to mix and match attires. Well, we are in end times. I was patiently waiting for mummy G.O to turn up. I was called again by the woman outside. Nawa

“Aunty e jor, e pa phone yin” (Aunty please turn off your phone .) then she pointed to a banner outside that asked for phones to be turned off during service. Nawa. No videos for you people. I didn’t want drama. So I turned it off and went back into the church.

Sunday school was over and mummy G.O was yet to be seen. Ah she better turn up for us. The lady beside me was staring and I caught her gaze. “Are you a new member?” She asked with a grin. My suspicion arose. She must be one of us. “Yes.” I answered. “Me too. Who invited you?”

I was starting to wonder who sent the lady to me. “I came on my own.” The lady didn’t seem convinced. She had a purple cloth tied around her waist. I knew it was the lady outside who did that. Aunty’s gown was too short. 🤣 “It’s a lie, you were sent here.” I was just confused

Then she revealed to me that she was a journalist. 🤣So no be only me come here to get story. I told her I wasn’t a journalist but just a girl that liked to catch cruise. I could tell she had her doubts. Then I looked around again, I began to realize some things were off.

Some of the few youths were not true members. I could tell. Like the young journalist had her feet painted, a lady at the other row wore slightly high heels, a young guy on the male row had his eyes darting here and there. I knew I wasn’t alone in this. We were quite a number.

Mummy G.O was still nowhere to be found 😭 I was getting worried. Where’s my mother in the lord? Where’s my mummy that has dined with Lucifer? I began to miss her. Miss a woman I’d never met. It was emotional 😩

Then a lady mounted the pulpit. It was not my mummy G.O. It was as though my heart got broken all again. I decided to stay calm. Mind you, I was hiding my fixed nails and tattoo near my wrist. I didn’t want to be the center of attention. A lady walked in with a beautiful gown.

Well, still not mummy G.O but I knew she wasn’t a member and was one of us. The preaching was about God giving insight and demystifying. To be honest, it was nothing of the extraordinary. I was yearning for the ‘Luzifa’ talks and how wearing Vneck was a tool of antichrists 😭

Where is my mummy G.O. I knew she was around. I mean she was the owner of the church. But I knew something was off. Why wasn’t she preaching. I had so many thoughts. Then I began to doze off. I tried to concentrate on the preaching but it was that of mummy G.O I wanted 🥺Then it was time to pray and I was still seated, there’s this trick I do. I sit and sleep but my lips move as though I’m praying. Well, the preacher walked all the way from the pulpit and tapped me. “Sister we don’t sit and pray in this church, please stand.” Omo! Why naaaaa!!!

I stood up to pray. It was not a cast and bind type of church. So there was no throwing and rolling of heads and clapping etc or screaming about the village people. We stepped outside to continue the prayers. Mummy G.O still yet to be seen. What’s going on!!!! Where’s my mummy!

After the prayers ended, we went back inside. It was time for tithes and offerings which also included building offering. 😑I no get cash. I no put money. Leave me. I just want my mummy G.O. I got to learn that she was not in sight because she was getting death threats 😭😭😭😭

I was shattered. I was sad. My own mummy G.O being threatened. But I could understand. That’s what comes with popularity. Church was over. They did not share anything for new comers 😭😭. As we stepped outside, true intentions were exposed. Journalists posed as members were many!

Now, it’s getting interesting at this point. I get in my car and decide to drop some people off. The lady in the beautiful dress and the journalist. So I ask her “What media do you work with?” The lady on the gown said she came for personal reasons. Then she reveals –

“She ruined my friend’s marriage.” I’m taken aback. I ask how. “You see those things she said about Tonto, she said the same about my friend to her husband. It was as though he was hypnotized and soon after, he divorced his wife and began sponsoring this woman’s mission. Gengen!

“He has put so much fund in this woman’s ministry and why her church is so big.” The journalist asks “Can I speak to your friend?” “No, she rather remains private, she’s travelled out of the country and wants no drama.” I feel sad about this, I hope I can finally meet Mummy G.O.

Well, this is the end of the line. I did have an eventful Sunday.” 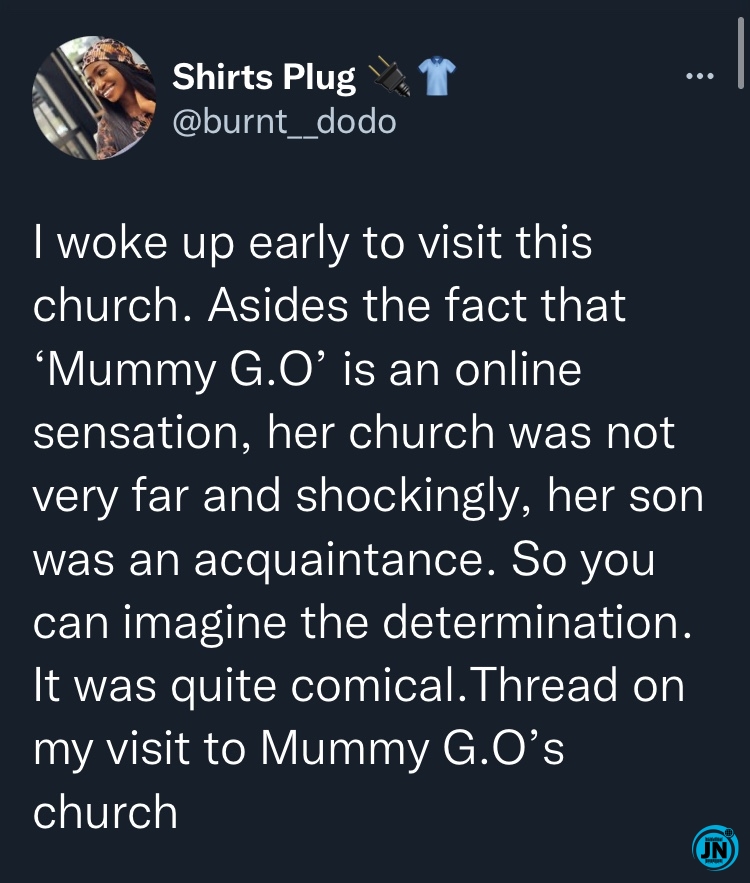