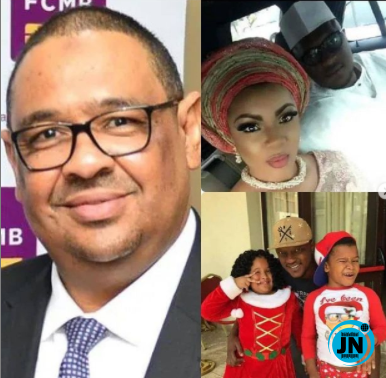 Moyo Thomas, the lady who allegedly got involved in an office romance with her FCMB boss, Adam Nuru that produced two kids, a revelation that led to the early demise of her husband, Tunde Thomas, has now changed her identity to Mo David.

According to viral reports, Moyo Thomas is now involved in a hide and seek game, on the internet after she escaped to the U.S. in 2017. She is no more Moyo Thomas, but Mo David.

Moyo, who now works as recruitment manager with Park Nicollet Health Services in America now bears, Mo David, as reflected on her new profile on LinkedIn.

Few hours after the name changed was done discovered, She quickly removed her photo image.

People who have been tracking her discovered her trick and blew the whistle on Sunday.

She responded by removing her photo from the new profile, but left her history with FCMB intact.

Moyo attended Obafemi Awolowo University, Ife from 1998 to 2004, where she read economics.

She later went for a Masters degree in International Human Resource Management at Cranfield School of Management, in UK.

She worked for FCMB for almost 13 years in the human resource department.

Adam in a statement released on 3rd January stated that the story was fabricated and fake urging the general public to disregard it.

“Tunde is the father of the two children and Moyo never told him he was not their father. Moyo and Tunde clearly worked to ensure the differences they had did not affect the relationship they respectively have with the two children.

“Tunde paid a visit to the USA to visit the children in June 2018. He met them and interacted with them unhindered. This was after his recovery from the stroke he had earlier that year. He was in touch constantly with the children, calling and having fatherly conversations with them, even at odd hours, at least twice every month from December, 2017.

“The last of such calls took place on Thanksgiving Day on 26th November, 2020. You will agree that this does not paint the picture of a man who had been told he was not the father of his children as was maliciously stated in the petition and is being circulated on social media.

“It is very sad that a group of people have decided to take the differences between a married couple and misrepresent it into a sensational story. It is unfair to have the pictures of his young children splashed all over the internet.

“Tunde had a mild stroke in 2018. By the grace of God, he was able to fully recover from this and carried on with his life. He was obviously doing well at his job and was in another relationship with a lady who was pregnant before his death.

“Why he had a cardiac arrest that led to his eventual death almost 2 years after remains a mystery that only God can provide answers to. We can begin to postulate on possible reasons, but we would rather not, to preserve the fond memories of Tunde.”

“Tunde has now gone to be with his maker. We do wish his family and friends, including his pregnant girlfriend, the fortitude to bear the unfortunate loss. He has now been laid to rest and we implore all to allow those grieving his loss, including Moyo and his children, to do so in peace. May Tunde’s soul rest in perfect peace.”