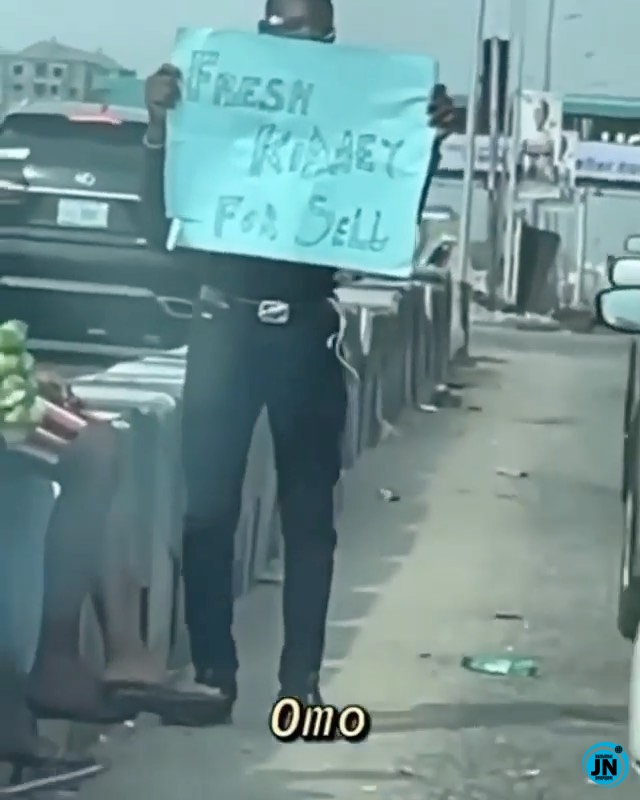 The photo of a man has gone viral on social media as he was seen in Lagos traffic with a placard containing unusual words.

While it’s known that diverse wares are displayed in Lagos traffic, the man’s case is different as his placard read ”Fresh kidney for sale.”

It is, however, unknown if it’s his or that of another person he plans to sell.

While some Nigerians found it funny, others believe it was wrong of the man to put up such.

a social media user wrote while commenting about it.


”I saw this guy yesterday in ikate Lekki traffic light”

”No matter how dis night seems funny, I don’t think d relevant authorities should let dis go, dis guy should be arrested before some criminal minded people turn this to lucrative business by harvesting people organs to sell.”


”Holy Mary that guy should be arrested immediately because it might not be his own kidney he wants to sell.”

Mr. Ibu and his wife celebrate their 11th wedding anniversary (Photos)
A Queen Will Always Remain A Queen – Kiddwaya Shades Laycon Following Drama At Dorathy’s Party
4 arrested for gang-raping teenager in Lagos
‘Wizkid, What’s Taking U So Long To Get Me Pregnant’ - Lady Tells Wizkid, See Replies She Got