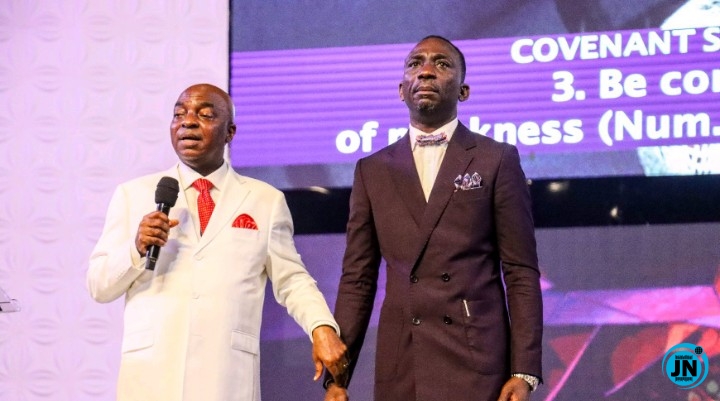 According to PM News, Enenche noted that Bishop Oyedepo deserved another aircraft even though he has one already.

Making the promise while speaking during a combined service at the Glory Dome in the Federal Capital Territory, Enenche was quoted as saying;

“I want to live a Kingdom-first lifestyle, start now! I want to be a major giver in the Kingdom, don’t wait! I believe that one day, I will buy my father in the Lord (Oyedepo), an aircraft.

“I’m trusting God for that, not that he can’t buy for himself, but this is just to add to what you have Sir, but before I reach that level, when he bought this current aircraft many years ago, I went to him with an offering; I said, ‘This is for aircraft’s tyre.’

“The meaning of it is; if I had enough money to buy the aircraft, I could have bought it but, since I cannot buy it now, at least this money is equivalent to the tyre – plenty money because every part of the elephant is big.”

Actress, Ruth Kadiri sends strong message to colleagues who campaigns for old politicians that has been in power for a long time
“Please forgive me, I’m depressed” – Isreal DMW breaks silence amid imminent sack
Buju Sends Haters A Clear Message After His Performance With Wizkid At The O2 Arena
Juventus player Blaise Matuidi tests positive for coronavirus