I prophesied T.B Joshua’s death three times, we spoke about it – Prophet Iginla
Posted by 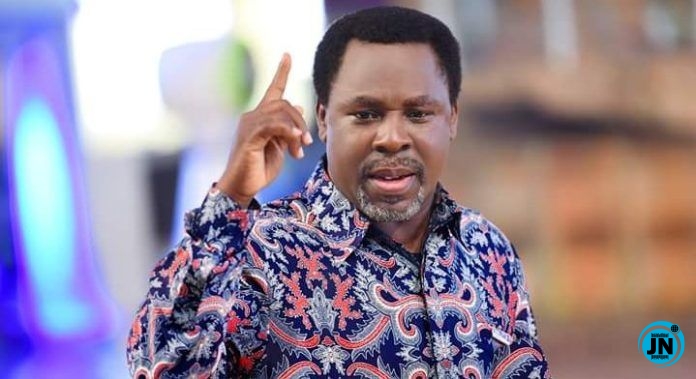 Popular man of God and the General Overseer of Champions Royal Assembly, Prophet Joshua Iginla has reacted to the death of his colleague and popular televangelist, Prophet TB JoshuaTB Joshua who passed away on Saturday leaving many in shock as to his sudden death.

Iginla in a statement revealed that three times  he had

He revealed that when he communicated the vision to T.B Joshua, the late pastor said:

“Thank You, my brother. If it’s his wish to keep me, he will keep me.”

You took a bow to the sovereignty of God. After you lived your life selflessly serving in the kingdom of God, you lived for the poor, homeless, widows, orphans, and Afflicted. You stood for the Prophetic, defended, and supported the course until the end. I will surely miss our long private kingdom discussion.

I celebrate you and please, My Heartfelt sympathy goes to the entire SCOAN FAMILY as a whole. As my brother, Prophet T.B JOSHUA takes his personal race to the finish line, A gentle walk to Heaven’s gate, with the soft voices of angels welcoming him home.

Indeed You are a reflective soul and a rear distinctive General in the kingdom of our Heavenly Father.

You came with a distinctive Grace, you did that which our Heavenly Father sent you to do and Now YOU HAVE GONE to give account. Thank you for your endless kingdom service, sir, till we meet at the feet of our father ADIEU MY BROTHER."

‘It’s Obvious Your Fiancee Is A Sugar Boy’ – Fan Lambastes Angela Okorie For Hiding Fiancee's Identity
Chioma Reveals When She Got Pregnant With Davido’s Child
‘No Oppress Us’ - Fan Calls Out Adekunle Gold After Bragging With His Wife, Simi (See Reactions)
Singer Burna Boy’s Signee, Buju, Accused Of Infidelity And Assault By His Girlfriend