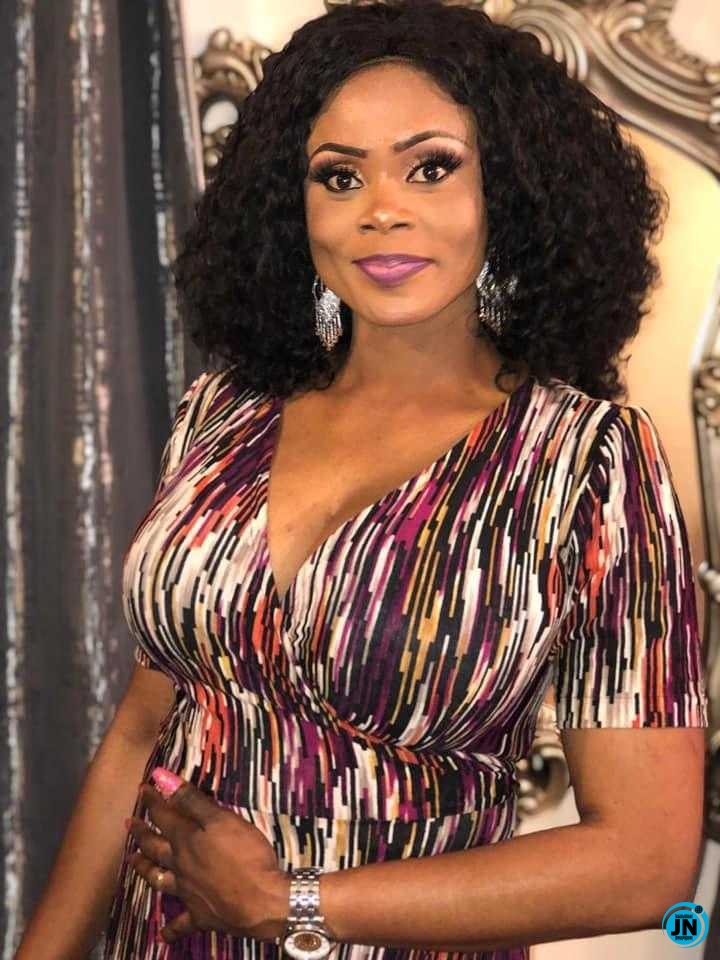 Amid the recent divorce between the Ooni of Ife, Oba Adeyeye Enitan Ogunwusi and Prophetess Naomi, controversial Instagram blogger, Gistlovers rolls out reasons that resulted in their split.

The unidentified page handler accused the UK Nigerian blogger, Abike Jagaban of spearheading the divorce owing to the amorous relationship the King was having with her. 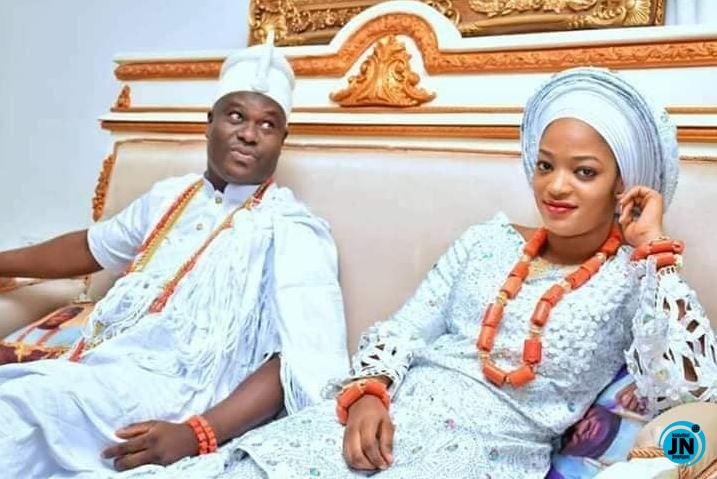 Read the gist below:

“Hello tueh tueh, been seeing a lot of cut and join stories about the Ooni and his estranged wife, some said Na money cause fight, say Na 1b project cause fight😂😂 , some say Na because Ooni slept with Naomi’s mother, a lot of cut and join gist out there 😂😂😂,make all of una getat oo, that’s why I don’t jump on gist, if I no know the gist I rather shut up than cooking stuffs up.

Now this is what really happened in the Ooni of ife palace, who remembered when I posted about Ooni of ife having a relationship with a controversial Uk blogger, in person of Abike Jagaban and they were really serious then, The Queen find the king Extra marital affairs annoying and according to her, it’s an insult to her and the throne, he should Marry them if at all he likes them but she won’t take any disrespect from any side hen.remember that her video she did while kneeling down and eulogizing the king and at the same time teasing the king about his side chics, well the Matter got messy in the palace as Abike jagaban goes on and on to tell who cares that Naomi is a small girl and she is not the only wife, other wives in the palace too ganged up against her because she is the only one the king has Been flaunting, she endured all of that until The Queen Ashley saga, the Queen Ashley who is believed to be deeply rooted in their tradition and knows a lot about the tradition is said to be the apple of the eyes of the king now,she represents the king for any traditional whatever which the Pastor Naomi can’t do, the attention started shifting from her and her family because virtually all her family stays in the palace with her,the Queen Ashley was everywhere and that didn’t sit well with Naomi and her Family because she was supposed to be the King’s first wife who gave him an heir to the throne, although that was not the first issue Queen Naomi and the king had, because she left the palace sometimes back while pregnant and the king sent elders to Akure to apologize to her, hence the name Tadenikawo that the king gave his son when he arrived , long story short sha Queen Naomi too her fault, she wants to eat her cake and have it, because Na jeje King siddon for palace(to be contd)

Continuation Oba was sitting for him palace jeje when Queen Naomi carry ministry enter palace, there and then she said the lord ministered to her say Ooni be him husband and God ordain am , long story short everything worked out for them and they married her traditionally into the Ooni of ife palace, contrary to the fact that she is the only wife, she met some wife at the palace and the king sisters who are the king’s right hand, so knowing all of this and putting your head in it means she is ready for what it takes to stay in the palace, yes there were issues of building contract gone wrong but the billions being mentioned is a lie, Ooni of ife is seriously in debt and his real estate brother has been the one funding him for a while and some lands he snatches in ife, about sleeping with Naomi’s mum, that’s a lie too.

The king family and his sisters were living in the place and Queen Naomi and her own sisters are staying in the palace too plus her mama Na her P.A always going everywhere with her, true two families will alwys contradict each other but that one no be wetin pursue her, the king prick Na giveaway gbola Na why she run and Ashley was almost almost taking her place as the kings favorite, recall it was a day after I posted the story about the other queens that she posted her Divorce speech on ig, as for all these blogs doing wack PR job for the Ooni, Queen Naomi page was not hacked , she left the palace with her mum and sisters before putting out that speech, Abike Jagaban the bold side chic, she showed Queen Naomi shege, but Na wetin Pastor Mrs eye find she see, i come in peace oo.

Royalty isn’t beans ooo, The King has been a wandering gbola right from the days of his first wife, his second wife Zainab matter no too choke because Na street meet street, Zainab had sugar daddies while married to Ooni too, but Pastor Mrs wanted the King attention to himself alone which is not possible, igi ewedu oni wo pawa oo” 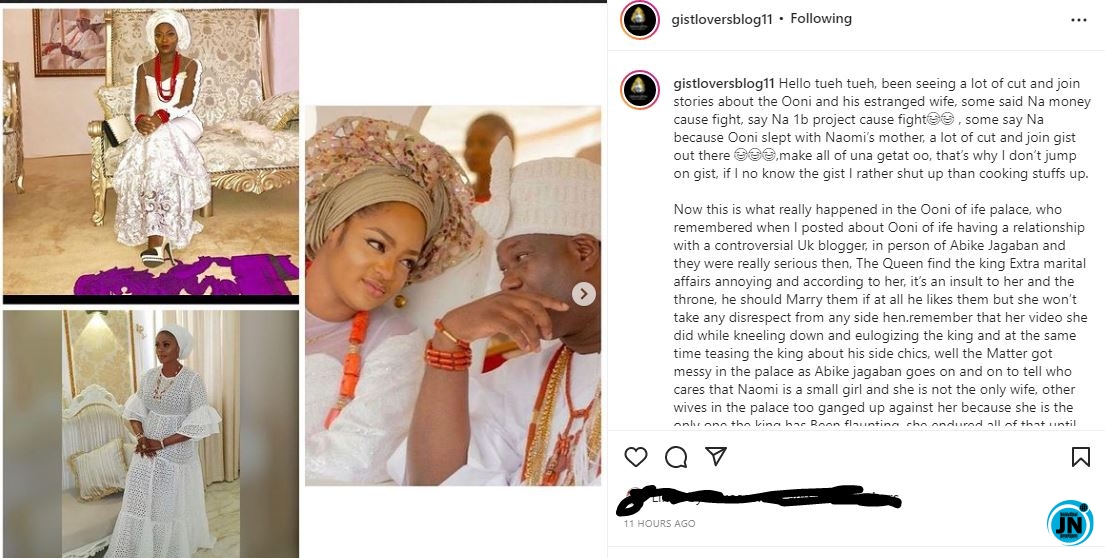 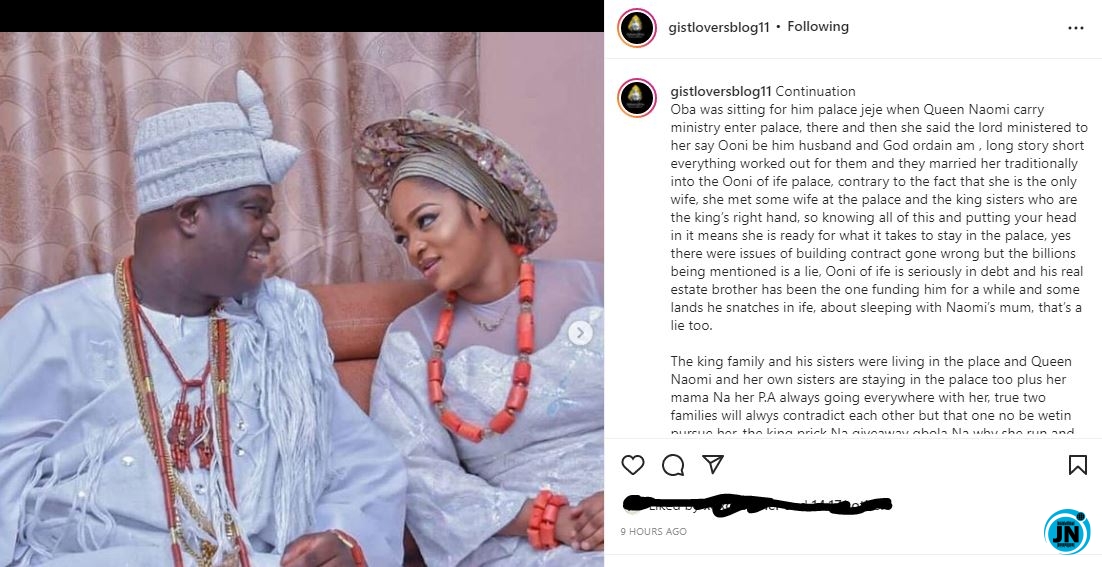