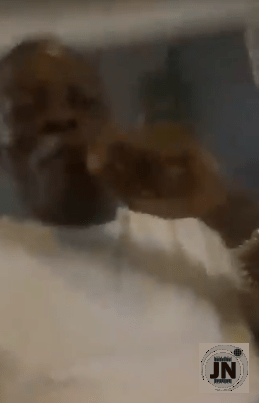 A Nigerian police officer has bragged to shoot sporadically at anyone who challenges his job amid the ongoing EndSARs nationwide protest.

In a video that surfaced online, the police officer could be heard emphasizing shooting anyone that comes his way in the name of protesting against police brutality and harassment.


It is worthy to note that, the #Endsars protest started over 72 hours ago.

A movement led by celebrities alongside Nigerian youths against a unit of the police force – Special Anti-Robbery Squads, SARs – over incessant harassment and brutality of innocent civilians.

Reports Revealed That Tonto Dikeh Is Still Stuck In Dubai Due To Police Incident
See The Moment Funke Akindele Was Arrested By Police Officers
Nigerian man reportedly dies in Dubai police custody after being arrested for flaunting Dollars on Instagram
‘Police officers who died, injured during #EndSars protest to get automatic promotion’ – IGP, Adamu

U no well, all ur family members, wife and children go use head carry am

U just dey make mouth ogah, try am mk u shoot person, weder ur generation to come no go die.