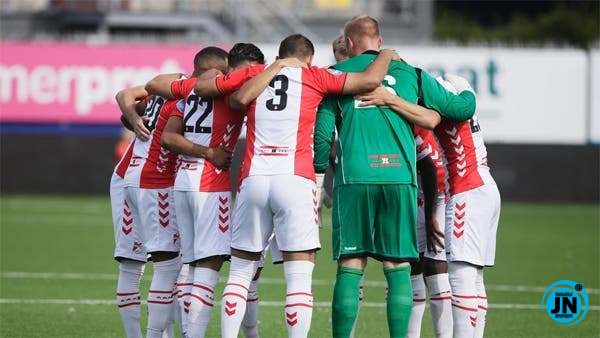 Dutch top-flight club FC Emmen will not be allowed to enter into a shirt sponsorship deal with a company that makes sex toys, the Dutch football association (KNVB) has said.

Emmen played their opening game of the new season without a logo on their shirt on Sunday as they were still looking for a sponsor.

After agreeing on a deal with Easy-toys, they sought permission from the KNVB but it was swiftly denied.

“It is not appropriate to display sponsorship from the sex industry on match kit,” said a statement from the association, noting it was in violation of their regulations.

“We must take into account that football is for both young and old.”

The club said they were “surprised and upset” about the rejection but would review the situation.

“We will study the KNVB’s arguments and consider what to do next,” they said on the website. “In any case, we do not intend to drop a party that wants to become the main sponsor.”

“For us, the collaboration was logical,” their chief executive officer Eric Idema told Dutch media on Thursday.

“We hoped that more positive attention for our webshop would contribute to breaking the taboo that still rests around our industry.

“The fact that eroticism and sexuality are still uncomfortable subjects for many is evident in the decision of the KNVB,“it said.

Easy-toys have a smaller sponsorship deal with another Eredivisie club FC Groningen, displaying their name on billboards at its stadium.

According to the KNVB, permission is not required for the content of touchline advertising boards but is necessary for shirt advertising. (Reuters/NAN)

How Pastor Timi Adigun’s wife forced his teenage sexual abuse victims to apologize to him
“I once hacked into my boyfriend’s email and lied to a girl about his sexuality” – Actress, Zainab Balogun reveals
Ghanaian lady reveals the craziest place she had sex.
Woman seeks divorce over alleged lack of sex and care