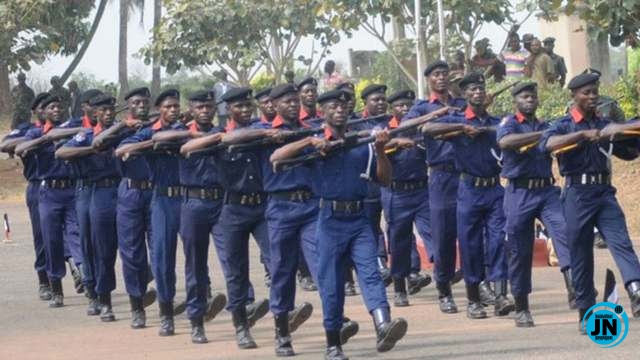 The Plateau Command of the Nigeria Security and Civil Defence Corps (NSCDC) said it had deployed 2,100 personnel to ensure peaceful and hitch-free Christmas and New Year celebrations in the state.

The command’s Public Relations Officer (PRO), Mr Obasa Tanimola, disclosed this in a statement made available to newsmen in Jos on Saturday.

According to Tanimola, some of the personnel will conduct routine patrols, while others will be stationed in flashpoints to curtail any situation that will breed violence.

He quoted the Commandant of the corps in the state, Mr Stephen Jiyason, as appealing to residents of the state to cooperate with the command in ensuring a peaceful Yuletide.

“The Commandant is assuring the public of the preparedness of the  NSCDC and other security agencies to ensure a peaceful and hitch-free Christmas and New Year celebrations in Plateau.

“A lot of strategies have been put in place for the maintenance of peace and order in the state during the celebrations.

“That is why the command deployed 2,100 officers and men to ensure a violent-free Yuletide in the state,” he said.

The PRO advised residents of the state and the general public to be peaceful and desist from taking laws into their hands.

He also called on the people to report any suspicious movements by groups or individuals in their vicinity to security agencies for a prompt response.

He urged residents of the state to strictly adhere to the safety protocols put in place to curb the spread of COVID-19, during the Christmas and New Year holidays.