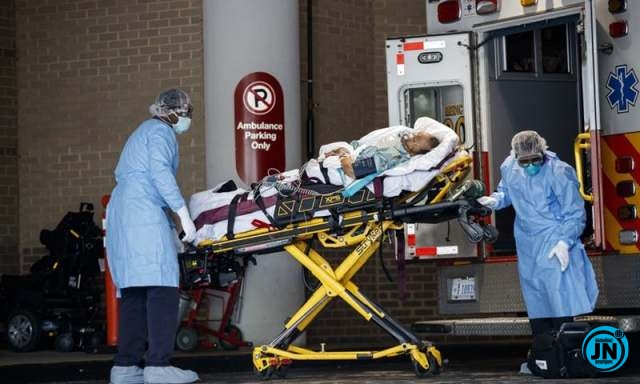 The number of people hospitalized with Covid-19 in the United States surpassed 100,000 – an all-time high – as the pandemic rages on and strains health care systems.

A record 100,226 Americans were in the hospital with Covid-19 as of Wednesday, according to data compiled by the Covid Tracking Project, the latest in a weeks-long streak of record-setting daily figures.

The US reported almost 200,000 new coronavirus cases on Wednesday and 2,733 deaths from the virus.

The Director of the Centers for Disease Control and Prevention, Robert Redfield, meanwhile warned that the death toll could reach 450,000 by February.

“The reality is, December and January and February are going to be rough times. I actually believe they’re going to be the most difficult time in the public health history of this nation,” Redfield said during a talk at the US Chamber of Commerce Foundation.

Officials in some states, including California, have warned of shortages of hospital beds and staff.

Daily new coronavirus cases, which had dipped from record highs as Thanksgiving muddled reporting, rose to more than 180,000, according to Johns Hopkins University data.

The US also saw the most Covid-19-related fatalities since mid-April, with 2,597 people dying on Tuesday, the Baltimore-based university said. The figure is nearing April’s record of 2,607 daily deaths.

While vaccines are within sight, health experts expect gatherings at Thanksgiving and other holidays to further fuel the widespread surge.

US health authorities on Wednesday warned people to avoid travel during the Christmas holidays at the end of this month.

“We need to stop these exponential increases and that’s why we are asking the American public to prevent infections and postpone travel,” Henry Walke of the Centers for Disease Control and Prevention (CDC) told a press briefing.

The CDC advised people who travel anyway to get tested before and after the trip. The agency also said its recommended two-week quarantine could be shortened to seven or 10 days, provided a person tests negative for the virus or shows no symptoms.

A CDC advisory panel on Tuesday formally recommended that health care workers and long-term care facility residents should receive the first available doses of Covid-19 vaccines in the US.

President Donald Trump has hailed recent progress on vaccine developments but appears to have largely ceased paying attention to the spiraling outbreak. There are growing concerns that his administration is increasingly absent from efforts to slow the spread of the virus.

The US has seen far more cases and fatalities than any other nation. The country, which has a population of around 330 million, has recorded 13.8 million infections and over 272,400 deaths since the start of the pandemic.

Globally, more than 64 million coronavirus cases and 1.4 million deaths have been logged.

Actor Adeniyi Johnson Hit Back At Fan Who Advised Him On His Acting Career
#BBNAIJA2020: “I Am Used To Dating White Men Only” – Ka3na Opens Up On Her Relationship Lifestyle
BBN: Whitemoney Reveals To Big Brother What Maria & Pere Have Been Doing To Him Since The Nomination
BBNaija star, Whitemoney strikes another big achievement