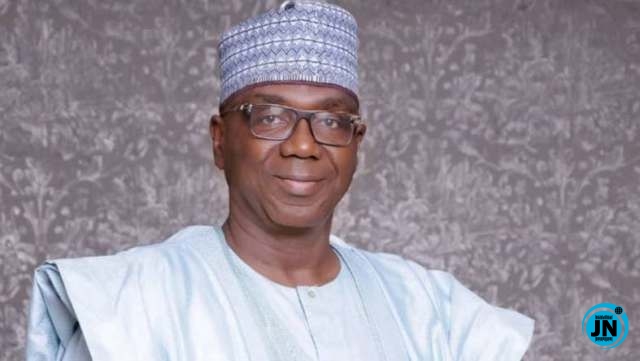 Governor AbdulRahman AbdulRazaq of Kwara state is not taking the provision of effective health care delivery for the residents of the state lightly. The Health Insurance Scheme which the governor put in place to cover all the 3.2m population in the state is mandatory for all having been established by law.

Upon payment N9000, those in the informal sector which include artisans will enjoy effective health care services which cover surgical operation among others for one whole year. Those who are self-employed are to pay N8000 while people in the indigent sector will pay N4000. In the same vein, a family of four or six will pay N9000 for each member of the family to enjoy the same free health care services for the whole year.

The Executive Secretary of Kwara State Health Insurance Agency, Dr Olubunmi Jetawo-Winter told journalists in Ilorin on Monday at a press conference that Kwara state government has commenced the enrolment of 3.2m residents across the 193 wards in the 16 local government areas of the state for the highly subsidised health care system.

She stressed, “It’s good that Governor AbdulRahman AbdulRazaq is launching this highly subsidized healthcare scheme at time healthcare is almost unaffordable. Targeting good health for all residents is from a good heart of the governor because sound health gives one access to do every other thing in life. Without sound health, any being is as good as dead”. Already, she said the agency had so far captured 100,000 people while health workers were also being trained for the project.

She said,” So far, we are in the third week of the 12 weeks of the registration exercise and we have already captured over 100,000 beneficiaries in the registration data. We are hoping that by week 12, which is early next year, we would have captured a good number of the Kwara residents.

“The benefits package ranges from simple ailments like cold, malaria and it goes on to secondary services like surgeries, childbirth, antenatal etc. As a result of the launch, we have indigent who never had access to healthcare going through surgeries, we have had a couple of childbirths under the scheme. All these were 100 per cent subsidized for the beneficiaries.

“For the purpose of health insurance, we have divided the population into three segments. Segment one involves the indigent people and those people are 100 per cent subsidized by the state government through the equity fund that is derived from the one per cent consolidated revenue fund that comes from the state once a year.

“The second segment of the population is the informal sector. The premium of the people in this category has been put at N6,000 per person per year. The premiums are not arbitrary figures. They were scientifically determined putting all our health risks into a basket and determining the cost of providing such healthcare per year.

“The third segment is the formal sector. This sector is actually divided into two parts, namely the public and private sectors. The premium is N9,000 per annum per year”

Dr Olubunmi Jetawo-Winter, further said that the project would ensure each healthcare facility in all the 193 wards in the state that is effective and functional for the project implementation.

The agency boss, who said that 200 enumerators, 32 supervisors and two separate companies had been engaged to oversee the ongoing registration of beneficiaries, added that 59 healthcare facilities, out of 200 already inspected, had been accredited for the programme.

Mrs Winter particularly noted that the scheme is mandatory for all residents in Kwara state. According to her, “it is backed by the law, it’s a must that if you live in Kwara state you must partake in this programme. The mandatory part of the law is health insurance, you must be covered by the health insurance, so it is either you are picking us or you are picking health insurance”. We have a family package which consists of the father, mother and four children. If the parents are working in the formal sector, it is N9000, so if it is a family of six, then we multiply N9000 by 6, to arrive at what the family will pay and they will all get free health services.”

On sources of funding for the insurance package, she said, “the government is paying for the indigents while part of the N9,000 paid by the formal sector is also used to complement it. The government will pay from the CRF (consolidated revenue fund) and we also have donor partners too that can come and take it up, they just need the scheme to start and it is very much renewable after a year.”

On whether the stipend paid by the beneficiaries is renewable annually, she said,” there will be reviews, the price can go either up or down. We will have to assess the impact and also look at the market price, that is the economic impact so that once we’ve assessed, we then decide on the payment and tell the government.”

Speaking on the level of awareness of residents of Kwara state to the programme, she said,” before now, we’ve organized a lot of advocacy, we have gone out to some agencies and private companies to sensitize them and sell the scheme to them and so far so good, we got some feedbacks from them. There is also an awareness going on the radio, digital marketing, down to local government, shops, even to the traditional rulers, some even volunteered to register and it is still ongoing too.

“The objective is to provide accessible health care to all residents in Kwara state. Obviously, we know we cannot start with the whole 3.4 million people but we can start with a reasonable number of people by registering then into the scheme”.

At the official flagging off the programme in Ilorin last month, Governor AbdulRahman AbdulRazaq said that the initiative would boost life expectancy and help the economy.

While flagging off the programme, Governor AbdulRazaq said at least 10,000 indigents who have been paid for by the government are covered in the first phase of the insurance which is 100 per cent free for the vulnerable. The 10,000 were captured in a statewide pilot registration of indigents for the scheme in March 2020.

AbdulRazaq said the launch was another major step in his administration’s efforts to achieve the Sustainable Development Goals (SDGs) and called on residents to take full advantage of the scheme.

The governor said,” A major agenda of this administration is to ensure that Kwara State ticks all the right boxes and achieves the SDGs by 2030. This is beyond empty slogans. The launching of the health insurance scheme is a direct response of the administration to goal 3 of the SGDs which is access to good health and well-being. We are starting this scheme by onboarding at least 10,000 indigents as a test run. These indigents have had their premium fully paid. This means the health insurance is 100% free for the indigents. We hope to enrol many more indigents in the coming years.

“I commend our partners for their support and the leadership and staff of the health sector in Kwara State for their hard work. I specifically commend the leadership of the Kwara State Health Insurance Agency for seeing this through. We are also proud of an administration to have made the necessary investments in that regard.

“Health insurance scheme boosts the life expectancy of our people, promotes good health, and ultimately strengthens the economy. It has the potential to prevent families from a sudden fall into poverty as a result of an unforeseen health crisis. The insurance scheme takes care of basic health issues before they become complicated. Studies have shown that most of the health issues found in secondary and tertiary health institutions arose majorly because they were not tackled on time.

“I, therefore, urge people in the formal and informal sectors — who are to pay a token as their own premium —to enrol in the scheme. It is cheap, affordable, accessible, and is supported by carefully selected functional facilities and committed medical experts in the state.”

Steven Collet, who is the Ambassador Business and Development of the Netherlands Ministry of Foreign Affairs, said at the ceremony: “Today you have made history in Kwara State by launching the state health insurance scheme that will benefit the people of the state. By launching the scheme, you have shown that the most effective way for Kwara State, and indeed Nigeria, to tackle Coronavirus, other illnesses and the future outbreak is to invest in healthcare systems.”

Monique Dolfing Vogelenzang of PharmAccess said “the launch shows that the Kwara State Government is taking a lead in healthcare funding at a time of global pandemic”, urging citizens to take full advantage of the scheme.

The Governor officially presented ID cards to some of the beneficiaries at the launch which was attended by Speaker of the Kwara State House of Assembly Yakubu Salihu Danladi; House of Assembly members; cabinet members; and top officials from the Ministry of Health; and representatives of the development partners. AbdulRazaq presented ID cards of the scheme to a beneficiary from each of the three senatorial districts: Fatimah Suleiman (Kwara Central); Abdullahi Idris Ahmed (North); and Adekunle Jumoke (South).

“Him no de like person wey sick” – Reactions as Mr. Ibu regains his health; Charles Awurum reacts [Video]
“Are you depressed?” – Concerned fan quizzes Burna Boy’s mental health over choice of outfit
‘I am scared, pray for me’ – Singer, Peruzzi cries out as he battles serious health challenges
Obasanjo finally reveals why he chose Yar’adua despite his failing health