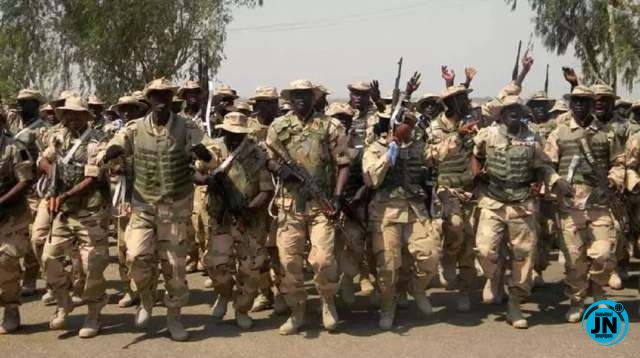 In continuation of aggressive clearance operation to stamp out banditry and sundry crimes in the country, troops of Operation Accord, acting on credible intelligence on the movement of suspected gun runners at Tangaza Town arrested 2 suspects.

The suspects are currently in custody for further action.

Also, on 8 November 2020, following credible intelligence that bandits were operating at Fegi Baza village in Tsafe Local Government Area of Zamfara State, troops swiftly mobilized to the area and made contact with armed bandits.

After an exchange of fire, the gallant troops overwhelmed the bandits thereby neutralizing 2 of them.

“The suspect is currently in custody for necessary action.

“The gallant troops have continued to dominate the general area with aggressive and confidence-building patrols.

“The Military High Command congratulates the gallant troops for their dexterity and encourages them to remain resolute in the fight against enemies of our Nation.”

Singer, Mr Eazi Reportedly Recovering From A Sickness That Looked And Felt Like Coronavirus
States should lead in economic recovery and sustainable growth
Davido’s Baby Mama and Fiancée, Chioma Recovers From The Coronavirus, Tests Negative Twice
COVID-19: NCDC announces 149,882 recoveries as at March 25