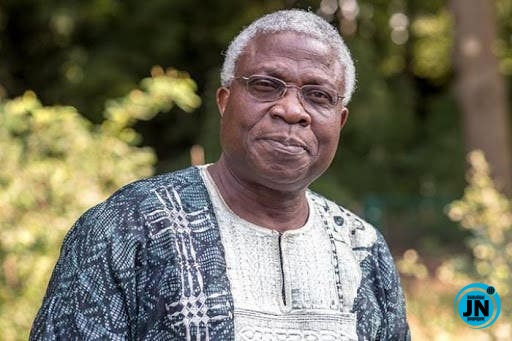 Written against the backdrop of the prevailing political climate during the Second Republic and the heyday of the Buhari-Idiagbon authoritarian regime, the anthology features socio-political protest poems such as A Dialogue of the Drums, The Padlock and the Key, A Villager’s Protest, The Politician’s Two Mouths, Searching for a Wife, The Land of Unease, Killing Without a Sword, Dying Another’s Death, The Unequal Fingers, Sleeping at Five and Twenty, The Prisoner’s Song, Feigning Rebel and We Have Waited So Long.

In each poem, the poet x-rays a peculiar sociopolitical-cum-cultural milieu, couched in lyrical lines and elaborately ornamented with diverse poetic devices that enhance its aesthetic quality. Most of the works featured in the collection are narrative poems infused with dramatic techniques such as dialogue, sarcasm, and humor.

Published in 1984 by Evans Brothers Limited, Village Voices has a communal setting. The anthology contains thematically related satirical poems that the poet explores through the portrayal of capricious political leaders, who make campaign promises they never intend to keep, pretentious freedom fighters who exploit the masses to achieve their selfish ambitions, and socially deviant rustics. From the self-deluded peasant farmer to the insatiable predatory politician, the poems showcase a grossly decadent society, revealing hypocrisy in every stratum.

Hypocrisy stridently resonates as the overriding theme in the poems. For instance, the poem “Advice” depicts the central theme of self-delusion which is realized in the hypocritical lifestyle of a pathological liar. Advice opens with William Shakespeare’s famous quote: “To thyself, be true” which the poet expands as the subject matter of his message: To yourself/ Friend, be true/ You farm a hundred yams/ And tell us it is two hundred/ Alright/ After eating a hundred yams/ You will eat a hundred lies.

Closely related to “Advice” in terms of thematic treatment is “Sleeping at Five and Twenty” which depicts the themes of ineptitude and self-inflicted suffering. The poet persona in this poem berates a lazy youth, warning him of the inevitability of a bleak future: If you have decided not to move/ take your wooden body out of the way/ At five and twenty/ there you are/ still sleeping and snoring/ snoring and sleeping/ while the sun burns your youth away…/no farms no barns/ no wives no children/ visiting relatives only/ when the pestle is fighting the mortar…

Conversely, the poem “In Search for a Wife” portrays the family as a microcosm of the larger society.  This narrative-cum-didactic poem mirrors the dilemma of a man whose marital destiny appears jinxed due to his mother’s foible: Idowu goes out in search of a wife …it is time/ to have somebody to lay one’s food on the table…/ ‘you are a good-looking young man,’ said his mother-in-law to be, ‘well-mannered and strong-armed, but the fault is not the hunchback’s/but that of his hunch: your mother is a great curser…’ Confronted at home, his mother retorts: ‘Whoever says I am a curser/ may he see his own ears/ without a mirror, may Soponna…/ turn his house into a furnace/may Sango…’

The theme of retributive justice is depicted in “The Prisoner’s Song” which exposes how nemesis catches up with a callous warder: The warder’s wife never bears a proper baby/ If she doesn’t give birth to a truncheon/ She delivers a lunatic/ You who flog others/ into cages like chickens/you who lock others up at noon/ and take away the key/ reaping your joy/ from the famine of freedom/ Look round your barn/ and behold this harvest of chains/ in which every belted boot man/ is an iron link…

The poet’s skeptical attitude towards the elite is revealed in the poems, “The Politician’s Two Mouths”, “The Padlock and Key” and “Feigning Rebel”. In The Politician’s Two Mouths, the persona sarcastically ridicules politicians for failing to keep their campaign promises: Is it not the politician/ who sees a snake/ and hails an earthworm? He prostrates for a vote/ but his mind squats like a hungry dog/…The politician has two mouths/ both sharp like the white man’s razor/ Whoever believes what the politician says/ His ear is blocked by the carcass of truth. Similarly, the persona tackles tyrannical rulers, using the metaphor of The Padlock and the Key and other symbolic images that portray oppression: We ask the tyrant/ when will you end your torture/ he asks us/ when will the snake stand on its own legs/ when will the rat wed the mouse’s offspring / we shiver with shrieks from death chambers.

Feigning Rebel satirizes self-acclaimed freedom fighters with ulterior motives. The persona queries the supposed “Messiahs”, recalling past disappointments from their ilk: Tell us/ are you real revolutionaries/ or feigning kings/waiting for crowns? / We have been roused/ countless times/by masked rebels of the night/ telling us the system is bad/ and the only way it should go is down/ The fire in their mouth/ lighted the darkness of our doubt/ the timbre of their voices seemed thick enough/ to hang a million hopes.