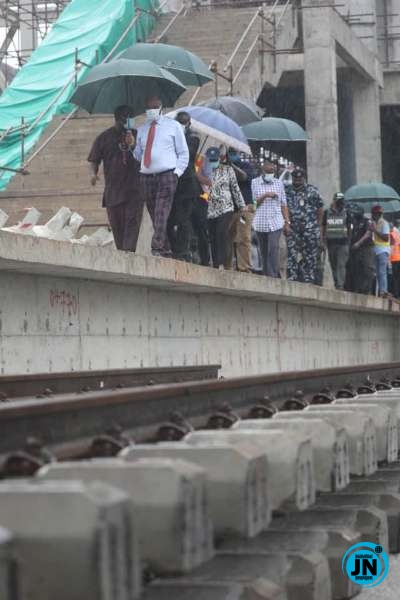 Minister of Transportation, Rt Hon. Chibuike Rotimi Amaechi and his team, during his inspection of the Lagos – Ibadan rail line

Minister of Transportation, Rt Hon. Chibuike Rotimi Amaechi has disclosed that upon completion of the Lagos-Ibadan railway project by December, the Federal Government would immediately commence construction of the Eastern rail line which connects Port Harcourt – Bonny to Maiduguri.

Amaechi said the planned commencement is subject to approval by the Federal Executive Council while listing other projects in line for commencement. They include the Kano/Maradi line and the Ibadan to Kano section of the Lagos to Kano rail line.

The Minister stated this in Ibadan, Wednesday, shortly after inspecting the level of work on all the Stations across the Lagos-Ibadan railway project.

He said, “We have sent to the cabinet the request for approval of two railway contracts, Port Harcourt – Bonny to Maiduguri. If that is awarded, that will be the next assignment for the Ministry of Transport. Also, the Kano – Maradi line, which passes through Kano, Dutse, Kazaure, Daura, Katsina, Jibiya, Maradi.

“We are also pursuing the loan for the contract which has been awarded for the Lagos to Calabar rail line. We also expect that Ibadan to Kano will commence before the end of this year,” Amaechi said.

“If you see the station at Olodo, there are improvements, they finished flooring, roofing, lighting, ceilings; just doors and windows left. Again, what is left at Kajola is just painting. There is an improvement in Olodo and Ebute-Metta.

Amaechi also disclosed that the contractors were expecting more engineers on-site to speed up construction.

Hear him, “The timeline hasn’t changed, but they didn’t meet my target for this inspection, my target was that by today (September 15), they would have finished the minor stations, but they gave an excuse that because of COVID-19 they hadn’t enough engineers on site. What you have is the same engineers supervising Agbado and Agege, so they move in between and that is slowing down the work.

“As for me, I want this job done because I want to move out of Lagos. Their submission is that by next week, all engineers will be on-site and work will commence and once work commences, they will be faster and by the end of September, they should finish the three major stations.”

Reacting to the accident that occurred in Oshodi on Monday, Amaechi said the Ministry would collaborate with the Lagos State government to ensure the fencing of the tracks, which he said has already begun in some parts to avert such incidents.