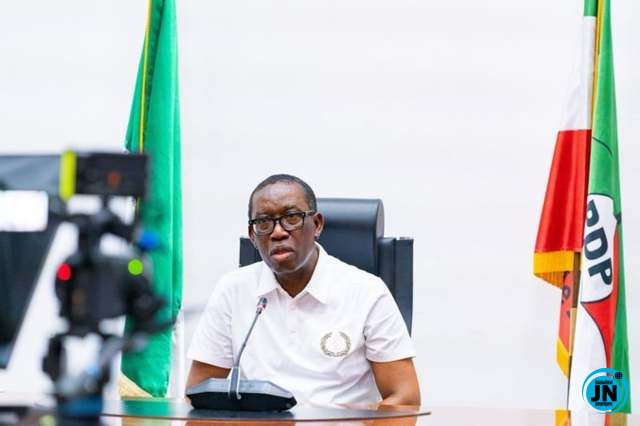 DELTA State Governor, Senator Ifeanyi Okowa, has picked holes in the increasing outcry by stakeholders in Niger Delta for the Federal Government to pay 13 percent derivation fund directly to oil communities, describing the agitation as illogical.

Governor Okowa, interacting with journalists at Asaba, the state capital, cautioned the campaigners that their current tactic would create disaffection, which antagonists of the region were looking for to divert attention from the issue of restructuring.

He noted: “I think it is important that we put our energy in the right direction because people have the wrong concepts on what needs to be done. As of today, I am not a lawyer, but I believe that the constitution is very straight forward on how derivation fund should be handled and who should handle it.”

”What we are doing as at today is to drive the process in Petroleum Industry Bill,  PIB,  where the oil-bearing communities themselves will have some leverages and be provided for in the constitution and law, which allow them to have a percentage for the various communities.

“That will help to strengthen the relationship between the communities and the oil companies because such provisions have been envisaged and that is the process that we ought to drive.

“But if every community rises and says they want to control their resources, am sure that Nigeria will eventually become a banana republic and there will be no control, no country, and no state.

”If you are talking about Delta state, for instance, I think about 20 or 21 local government areas are oil-producing, if every community begins to control its own, I am sure that the crises and battles that will come out of it will be beyond our control.

“Though people have their views and they have the rights to such views, it is for us to follow the constitution and the laws of the land at the moment. I believe that having been able to vote governors and lawmakers, we should allow them to manage these resources and if they are not managing the resources as we want, you have the right to vote the person out in the next four years,” he said.

“You did not push for the 87 percent, but it is the 13 percent coming to the state that you want to manage, it does not make sense. If you really want to manage your resources you should be clear cut on what you want, but unfortunately, people just want to be heard and noticed and continue to make their comments the way they want.

”And by the time the governors are talking on their own, you are getting a group of communities talking and those ones have a different viewpoint. By the time this division is created among the people, what then happens? They will say we are singing in different tones, that you do not have a collective voice on the true management of resources, which is the resource control we are talking about.

“They divert your attention from the issues of adequate restructuring of the country the way we are to talk about it.

“There is a lot of money spent in keeping the peace in the Niger Delta even though we have the military and others, people cannot say they are ignorant of this because it is a well-known fact,” the governor asserted.

Governor Okowa, however, there was room for a fair review, adding: “We tried to start the BRACED Commission, unfortunately, COVID-19 slowed us down, but now that we are beginning to understand things better, we have already appointed a director-general.

“And I believe we will have an avenue to relate with ourselves the more, to examine and share values of governance and ideas and speak with one voice.”

In his words: “There is no doubt that many times we have been shortchanged by the Federal Government because we are not in the center of issues on how much we get and what comes to us. But as much as possible we are hoping to be able to get the best we can in the current circumstance.

“As of today, there is a lot of money being owed us for derivation, we are working hard to see that will get it and pray that the government at the federal level will be magnanimous to pay us the entire backlog that they owe us.”

Speaking on the control of gold deposits in Zamfara state by Zamfara state government, “You will recall that the south-south governors before now were talking about the need for restructuring and need for resource control, and obviously are on that because we feel there is the need to restructure, not just powers at the federal level to the state and local government, but also the devolution of resources.

“But as at today, there are acts in the National Assembly that guide the issue of oil production which is dealt with in the constitution and with the solid minerals, those are not covered in these acts and obviously, this is already a sore point in our nation’s governance system,

”We cannot apply laws in our nation to the point in such a way that it becomes discriminatory because if people are allowed to process for their solid minerals, they should also be allowed to do same for their oil. So we are going to be very hard and try to make our voice as strong as possible … I believe that at some point in time, these discriminatory tendencies will have to be revisited in this nation at some point in time,” he added.

“We have been able to attract a few but the situation in the world is making things very difficult for investors to come in. We are also trying to ensure that we create an enabling environment; we have also passed a law on the ban of development levy which has been a great challenge for the state and we just created a coordinating committee, which will be able to deal with that issue.”

”We have the Kwale Industrial Park but COVID-19 has really slowed things down for us, and the way it is going, it is going to take a longer time for people to come and invest outside their countries.

“We also partner with the Central Bank of Nigeria and other businesses in the agricultural development sector which is also an area that can uplift a lot of our people, especially in areas of cassava and oil palm development.

“I believe all these are already yielding results because we are in the process of having a cassava site manufacturing company which will provide a lot of jobs and we are hoping to keep faith with this.

The governor, who spoke on the recent outbreak of yellow fever in part of the state, asserted: “On the number of yellow fever cases as at last week, I am aware that 22 have died, but we hope that now that the vaccination has started we hope the situation will be brought to normal.

“It takes about 10 days for people to get their immunity and hope that the death rates will be remarkably and eventually not be there any longer.”

“We are definitely going to scale-up vaccination in other parts of the state. We have many vaccination units in the state and I am told that in Ika North East local government area alone, we have about 80 teams and I believe that those teams will fan out to other local governments very soon.

Answering a question on if he planned to review pensions for former governors given the reconsideration of same by his Lagos and Kwara states counterpart, he said: “ As regards to payment of pensions for former governors of the state, I do not think I want to comment on that because there is an existing law in Delta state on that. I think there are better things for me to look into than to start looking back into the laws that did exist.”

“He (Lagos governor) has the right to make a decision that he wants to take as he has his reasons for doing it and I cannot criticize him, but there are many more important things to be done now time for me to start looking on how to reverse one law or the other because that is not in my thought process at the moment.

On job opportunity created for the people by the governor of Cross River State, Okowa asserted: ‘The governor has his right to make such employments. I do not know how many people he has on his staff list as of today, but I know that as of today, we are not trying deliberately to scale down our staff list, we believe that Delta state was overstaffed.

“But when vacancies occur, we do employ people just like the way we did when we employed some science teachers. I also believe in the course of 2021, we are going to employ more teachers but it will be mainly also science-based teachers.

“We will also be employing teachers for new technical schools and that will be in the early part of next year because we hope that the schools will kick off, September 2021, to engage them early enough and put them through some training and retraining before they take off in September. So we will employ according to needs and not based on pressure,” he stated.